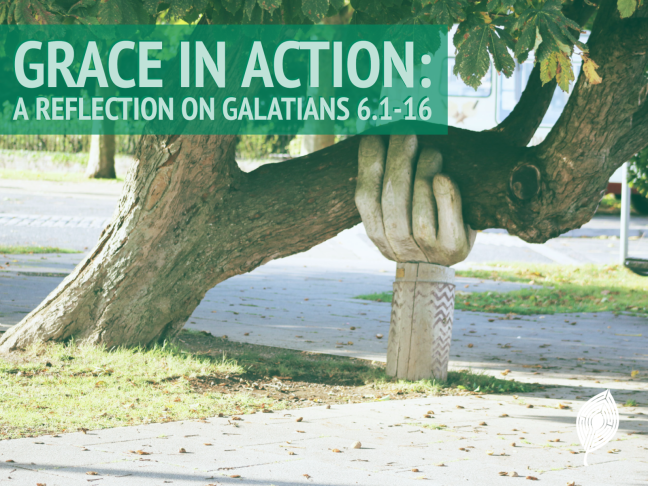 “Grace alone!” was the rallying cry of the Protestant Reformation. While, on the one hand, this represented a genuine recovery of the theology of grace — especially for Martin Luther himself — it did so in a very particular way. In much of Protestant thought, grace is understood through the lens of “You can’t do anything to earn salvation.” But, true as this may be (and it most certainly is true), this is a pretty limited understanding of grace, turning what is but one consequence of God’s grace into the sum total of what it might mean. Looked at through a bigger lens (that is, without reading the Scriptures entirely through the lens of Martin Luther’s personal experiences), grace is a much bigger idea, with much bigger consequences of Christian faith and life. Grace is the whole loving, generous, and open posture God takes towards creation. And it’s a posture that we are called to live out in our own relationships and communities. Everything we are called to do and be — loving those who are difficult to love, forgiving those who have wronged us, repenting and asking for forgiveness from those we have wronged, giving out of our wealth to those with fewer resources, and so on — is about grace in action. Even though it doesn’t use the word ‘grace’, today’s Epistle reading, Galatians 6.1-16, shows how this sort of gracious dynamic might play out in community life.

The passage begins with an exhortation to restore those who have done wrong:

My friends, if anyone is detected in a transgression, you who have received the Spirit should restore such a one in a spirit of gentleness. Take care that you yourselves are not tempted. Bear one another’s burdens, and in this way you will fulfill the law of Christ. (vv 1-2)

We see here a strong desire for the health of the community, but this health is envisioned less in terms of purity or adherence to a code of conduct than in terms of healed relationships. The person who has sinned is to be “restored” to community “in a spirit of gentleness.” This has grace written all over it, to the point that Paul feels the need to remind his readers to take care that they don’t get too enmeshed and risk their own spiritual health — they need to be gracious to their brother or sister in Christ, but they need to be gracious to themselves too.

This is an important piece that is often missed. Any time there’s a problem in relationships, it’s easy to slip into the problem ourselves, whether that’s responding to gossip with gossip of our own, responding to accusations with counter-accusations, or responding to violence in kind. But, even in more gracious responses, we can put ourselves at risk. It’s often true that the type of people for whom we have the most grace can struggle with the very things that are likely to cause us to stumble too. I have a friend, for example, who was years into recovery from drug addiction and decided to minister to drug users, only to find himself using again in short order. He had a huge heart for those living on the streets and on-the-run from trauma — and he was well-positioned to have the empathy needed to understand where they were at and what might genuinely help them. But, he was well-positioned to empathize with them because he carried same kinds of trauma, which meant he was also well-positioned to relapse, which he unfortunately did. We need to be gracious to others, but also to ourselves.

But, this important warning in mind, we are, in Paul’s words, to “bear one another’s burdens.” I love the reciprocity in this image. It isn’t about taking on more than we can carry or doing things that others are capable of doing for themselves (as the text makes clear in verse 5: ‘For all must carry their own loads.’). It’s about sharing, easing burdens not by taking them away but by coming alongside and supporting where needed, but also being supported just as much with our own burdens. In this sort of sharing the load, we “fulfill the law of Christ.” Once again we see that Christ’s Law is grace, love in action. There is no code of conduct, no standard of purity to which we must attain; to fulfill the law means to graciously walk alongside and support our siblings, teachers, and neighbours.

Do not be deceived; God is not mocked, for you reap whatever you sow. If you sow to your own flesh, you will reap corruption from the flesh; but if you sow to the Spirit, you will reap eternal life from the Spirit. So let us not grow weary in doing what is right, for we will reap at harvest time, if we do not give up. So then, whenever we have an opportunity, let us work for the good of all, and especially for those of the family of faith.

This Christian ethic may be gracious but that doesn’t mean it isn’t serious. “God is not mocked, for you reap whatever you sow.” If you put your time, attention, and care on superficial things — and this applies equally to legalism as it does to hedonism — you won’t get back anything good. But if you focus on the law of Christ, which was just helpfully defined as bearing one another’s burdens, what you get back will be of all-surpassing value: “eternal life from the Spirit.” That Paul’s opponents here are legalists and moralists as much as (if not more than) those often called ‘sinners’ is made clear in the next section:

See what large letters I make when I am writing in my own hand! It is those who want to make a good showing in the flesh that try to compel you to be circumcised – only that they may not be persecuted for the cross of Christ. Even the circumcised do not themselves obey the law, but they want you to be circumcised so that they may boast about your flesh. May I never boast of anything except the cross of our Lord Jesus Christ, by which the world has been crucified to me, and I to the world. For neither circumcision nor uncircumcision is anything; but a new creation is everything! As for those who will follow this rule peace be upon them, and mercy, and upon the Israel of God.

Paul picks up on the language of ‘flesh’ again here and thereby helps to define it for the whole section: those who are “sowing to the flesh” were those Christians who insisted that Gentile Christians be circumcised in accordance with Jewish Law. Here Paul notes that these legalists don’t even follow through with their legalism; Paul’s frustration is reminiscent of Jesus’ own frustration with the Pharisees:

Woe to you, scribes and Pharisees, hypocrites! For you tithe mint, dill, and cumin and have neglected the weightier matters of the law: justice and mercy and faith. It is these you ought to have practiced without neglecting the others. (Matthew 23.23)

If you’re going to concern yourself with the outer, superficial, or ritual aspects of the Law, you have to be doubly certain you’re concerning yourself with the more important parts: justice, mercy, and that reciprocal set of responsibilities to one another we call ‘faith’. Outer adherence to a code of conduct is nothing, says Paul, “but a new creation is everything.”

The new creation — the new way of life that is openness to God and one another in love, grace, and faithfulness — is the true Law about which we ought to concern ourselves.

And so, in today’s Epistle reading, we have a wonderful teaching on the gracious ways the Church should function. This is nothing other than the way of Jesus, which is the way that reveals the nature of our God, who is Love.

One thought on “Grace in Action: A Reflection on Galatians 6.1-16”