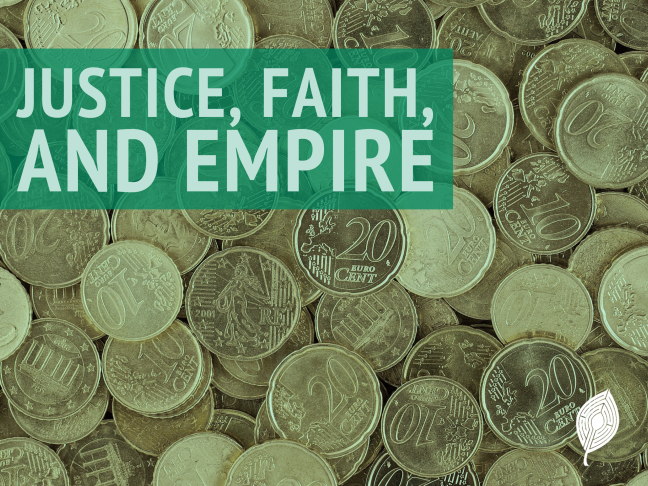 Paul could hardly have imagined the impact these words would have on the world and on Christian thought. To generations of Protestant interpreters, this verse has been the centre of not only Paul’s message, but all of Christianity. And, in typical human fashion, while these Protestants agree that this verse is the heart of the Gospel, they haven’t agreed on what it means. Thousands upon thousands of pages have been written debating the meaning of “the righteousness of God” and that nature of this ‘faith’ by which the ‘righteous’ will live.

There are a lot of reasons for this, theological, hermeneutical, and linguistic. These debates are far beyond the scope of this post, though we’ll definitely have to bring them along with us, so to speak, as we move forward. Instead, what I want to do today is to ponder the possibility that this verse actually has an anti-imperial agenda.

At first glance, this is an idea that may be surprising, or, if you grew up in Lutheran or Reformed circles, perhaps even heretical. But isn’t actually that far-fetched. Because “The righteous will live by faith” is a quote from Habakkuk 2, a text that is most definitely political and anti-imperial:

Look at the proud! Their spirit is not right in them, but the righteous live by their faith. Moreover, wealth is treacherous; the arrogant to not endure. They open their throats wide as Sheol; like Death they never have enough. They gather all the nations for themselves, and collect all peoples as their own.” (Hab 2.4-5)

Habakkuk’s oracles were directed against the Babylonian Empire that was rapidly expanding its reach towards Jerusalem and the Kingdom of Judah. This text makes Babylonian expansionism — the vacuum of Empire that always sucks resources, wealth, and people towards the centre — the theological opposite of the way of righteousness, or justice.

This isn’t just any anti-imperial text; it’s probably the clearest anti-imperial text in all of the Bible. The vision of evil embodied here in the Babylonian Empire is recognizable to all peoples who have faced similar threats throughout the ages. We know from contemporary sources that first-century Jews were happy to apply it to the Romans (see Elliot, 191^). And it could just as easily apply to the British Empire of the 19th Century, or the vast corporate empires of the 21st too. All gaping mouths sucking in the wealth of the nations.

Fair enough, but it could be argued that just because this is what Habakkuk meant doesn’t mean that this is how Paul was using it; the New Testament after all plays pretty fast and loose in its appropriation of biblical texts. But it seems to me that it would be too much of a coincidence for Paul to choose this powerfully anti-imperial oracle as the biblical basis of his argument about the meaning of the Gospel as he’s writing to residents — likely including citizens — of the imperial capital.

Moreover, as we saw briefly last week, “justice” and “faith” were important parts of the Roman imperial mythology. Iustitia ‘justice’ was one of he primary aims of the Empire, as recorded in the Res Gestae and senatorial decrees from the time; and fides — that essential Roman virtue — was imprinted on imperial coinage. It seems far too cute then to suggest that Paul’s selection of this verse from Habakkuk is accidental. Rather, he is issuing a direct challenge to the Empire and its propaganda.

But if this is the case, what is Paul actually trying to say? What is he saying about justice and ‘faith’ and how they relate to Empire?

It’s helpful here to take a step back and look at how these terms are used in Hebrew (the source of the quotation), Greek (the language in which Paul was writing), and Latin (the language of the propaganda I believe Paul is addressing). One of the reasons translation is difficult is that words rarely have an easy one-to-one correspondence between languages; this is especially true when it comes to abstract concepts. Sometimes they align pretty well; other times, they don’t at all. And we’ll see examples of both here.

In this respect, ‘justice’ or ‘righteousness’ is easy. The Habakkuk text uses the root דק‎צ‎ (tsdq)*. The adjective form here refers to the proper disposition towards right and wrong, whether as a judge, or the party who has the rightful claim or cause. In order words, it accords well with our contemporary English understanding of what it means to be ‘just’. The Greek δίικαιος (dikaios) is similar, meaning someone who behaves in accordance with law or custom. And the Latin iustus is again very close to our expectations, meaning ‘lawful, right’ or true’. While it’s true that the Greek noun δικαιοσύνη (dikaiosyne), ‘justice’, was used to translate two different Hebrew words — one with a more ethical or religious sensibility and more practical, legal connotations — it’s the latter word that’s used in the Hebrew here and so I see no reason to opt with the more abstract ‘righteousness’ translation.

The righteous are certainly just, and the just righteous, but it is justice that Habakkuk has in view, and there’s no reason to suspect Paul would disagree. This is a minor point, but I think it is important to insist on it since there is a small but vocal minority of Christians today who use the abstraction of ‘righteousness’ to argue that Christians needn’t be concerned with justice. So to say it explicitly, for Paul, divine justice is very much at the heart of things.

Where things get more complicated — and more important for English-speaking Christians to grasp — is with the ‘faith’ word. Because it was so important to Roman identity and propaganda, let’s start with the Latin, fides. When the Roman Empire put fides on its coinage, it was talking about ‘confidence, reliability, trust in a person or thing.’ If we remember the Roman social institution of clientela, we might think of fides as the chord that bound people to one another; if you were fidus, ‘faithful’, it meant that you honoured your responsibilities to those below and above you in the social order, and to the gods, the Emperor and Empire most of all.

In the Hebrew of the Habakkuk passage, the root used is אמן (‘mn), and refers to ‘steadfastness, stability, and trustworthiness.’ And, in the Greek, πίστις (pistis) has a range of meanings including faithfulness, trustworthiness, confidence, and credibility.

What we see in all three of these ancient languages is that, despite their differences in nuance, the words we translate as ‘faith’ in English are about personal integrity, responsibility, and accountability. It’s about doing what you say you’ll do, being who you say you are, and living up to mutually understood and agreed-upon responsibilities in relationships.

This is really important, because our contemporary English vocabulary tends to obscure this. We tend to think of ‘faith’ in terms of ‘belief’, and ‘belief’ in terms of intellectual assent. We ‘believe in’ Santa Claus or aliens. It’s far from the concrete realities of all these ancient conceptions of faith, which are all about showing up in the nitty gritty of actual relationships. (There was, as it happens, a Greek word for belief in this common English sense, and it’s explicitly not what Paul uses to describe faith in Jesus.)

With this in mind, we see that to ask the question about whether Paul talking about faith or faithfulness (one of the major questions of Pauline interpreters about twenty years ago) totally misses the point because it never would have dawned on Paul or anyone else of his time period to separate the two. To have faith in something wasn’t just to agree to it but to entrust oneself to it. And to be faithful was the flip side of the same coin, to be worthy of another’s trust. So to have faith in Jesus is to bind our fortunes together with his, having been persuaded that he is worthy of that trust. This is what Paul is at pains to explain in Romans and elsewhere: how Jesus’ death and resurrection are not at adds with, but actually reveal God’s faithfulness and justice.

We do have some remnants of this older sensibility surrounding faith in English in such expressions as ‘I have faith in you,’ or faithfulness, or ‘good faith’. And it’s this strong sense of the word we have to carry with us when we read our Bibles and do theology.

With all this in mind, Habakkuk’s oracle starts to come into clearer focus. The way of Empire is opposed to the way of the faithful because it is built on bad faith and broken relationships, the opposite of the way of God. The Empire can never be about justice, for its pride, domination, and insatiable appetites for the wealth of the nations are antithetical to justice. The Empire can never be about good faith, because it is predicated on a bad deal for the whole world.

Whereas the Empire and its structures and methods are bad fides and make justice very hard to see, these are revealed in Jesus’ true fides — faithfulness, integrity, and accountability. Jesus’ identification with the suffering of God’s wounded creation to the point of being put to death by Empire, and subsequent vindication through his resurrection from the dead, are what reveal God’s justice. Robert Jewett puts it well:

Paul’s gospel shatters the unrighteous precedence given to the strong over the weak, the free and well-educated over slaves and the ill-educated, the Greek and Romans over the barbarians. … All who place their faith in this gospel will be set right, that is, be placed in the right relation to the most significant arena in which honor is dispensed: divine judgment. Thus the triumph of divine righteousness through the gospel of Christ crucified and resurrected is achieved by transforming the system in which shame and honor are dispensed. (Jewett 19)^

Two thousand years later, much has changed, but also much remains the same. The world is still governed by systems of domination and greed, with a small minority sucking up the wealth of the world for their own benefit. In the face of this, those of us who follow Jesus are called to a different way. We are called not to bad faith politics and economics, but to entrust ourselves to God’s justice, which begins and ends in good faith, in personal integrity, and in real relationships.

The just shall live by good faith.

^ See the bibliography for the series, here.

*Hebrew words are based on roots of consonants, with the various parts of speech and grammatical information encoded in vowels, prefixes and suffixes. So, for example, the root mlk produces words like *melek ‘*king’, malak ‘to rule’, and malkut ‘kingdom’.

6 thoughts on “Justice, Faith, and Empire”