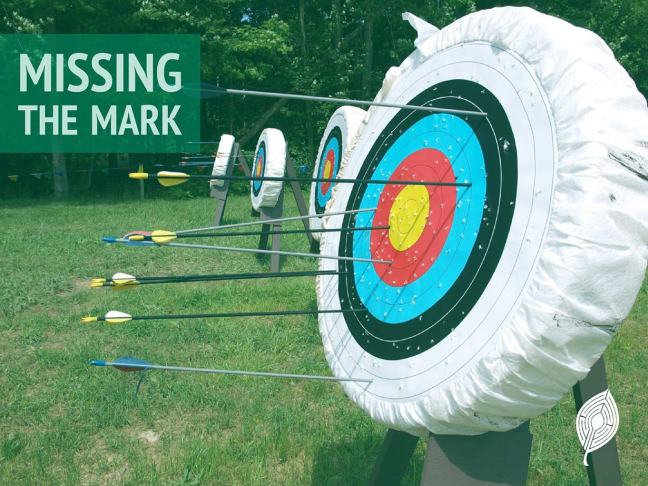 A couple years ago, I stumbled across the text of Jonathan Edwards’ famous sermon “Sinners in the Hands of an Angry God.” The title says it all. The sermon’s primary aim was to convince people of the horrors of Hell and to use this fear to spur them to repentance. I have to admit that reading this text incited me to fits of laughter instead of compelling me to confess my sins. I’m not sure if that says more about me and my culture or more about Edwards and his own — probably a little of both — that this sermon that was so effective in the eighteenth century falls so flat in the twenty-first.

Somewhere over the past century, the church in the West seems largely to have gone from an undue hyper-focus on the concept of sin, of which Edwards’s sermon was unquestionably both an example and contributor, to becoming very sheepish about it, to the point that any reference to sin is now instantly viewed as a neurotic obsession with sin. Some might point to this as a sign of social and religious decay, but I think it’s more likely a case of once bitten, twice shy. A culture that has heard too many fire and brimstone sermons is unlikely to have much use for the concept of sin, much like how a child who grew up with oppressively inflexible boundaries is likely to reject all boundaries. If everything is sinful, then, soon enough, nothing is sinful. But, while fire and brimstone sermons are thing of the past for most of us — and good riddance — it’s still important to to able to talk about sin. We only do ourselves a disservice if we don’t have a vocabulary we can use to talk about how we miss the mark in our relationships. We need to be able to talk about sin. We just need to be able to talk about it better.

Contrary to the doom and gloom from some Christian circles, I don’t think for one minute that we have lost our understanding of sinfulness in our culture. I think we are actually more aware than ever of how we mess up and hurt each other, intentionally, unintentionally, and systemically. As our culture’s awareness has expanded to include the experiences of more and more people, so too has our awareness expanded of how we hurt each other. Forty years ago, the idea that we have responsibilities to the Earth was laughable in most quarters; now it is orthodoxy in most Western contexts, secular and religious alike. Thirty years ago, workplace sexual harassment policies covered only sexual coercion or the promise of rewards for sexual favours; now they also cover hostile and sexualized work environments. And even over the past five years, we have been made so much more aware of the ways our attitudes and responses to gender, race, education, class, and sexual orientation negatively impact entire communities of people. We are more aware of sin than ever in this cultural season of #itgetsbetter, #blacklivesmatter, #idlenomore, and #metoo. We just don’t name these things ‘sin.’ Somewhere along the way, ‘sin’ came to be misunderstood, abstracted and distorted away from these everyday ways our lives bump into each other and the world around us.

Yet, far from the narrow and extreme understanding of sin many of us have inherited, the Scriptures contain a wide range of metaphors for sin, with different focuses and degrees of severity. I’ve written previously about the language of debt and trespass. But there is also language of blindness, of hunger and thirst, of bondage, separation, entitlement and ingratitude. My favorite metaphor for sin in the Scriptures is probably the most common, missing the mark, coming from the Greek word ἁμαρτία. The refers primarily to an errant throw of a javelin, an arrow missing its target, or a speech that doesn’t land as intended. (One could say that “Sinners in the Hands of an Angry God” sins today because is more likely to push people away from faith in Christ than draw people towards him.) This is an apt metaphor for how most of us experience life — just not quite being on target most of the time — and a far cry from what most people in our culture imagine when they hear the word ‘sin’.

The same could be said for many of the Old Testament words talking about sin. For example, Psalm 1 beautifully compares two paths: the way of the righteous and the way of the ‘wicked.’ But that is an incredibly harsh translation. The word itself is rooted in a metaphor of being loose or disjointed. The intended contrast in the text is less one between the righteous and the wicked than it is between the working of a well-oiled machine and one with loose screws, threatening to come apart at the seams; or of a path that takes you where you want to go, and one that meanders idly and directionless through the wilderness. And this is really the question at hand for the Psalm and in all of our lives: Is the path we’re on heading to where we want to go?  Does the path we’re on lead to healthy relationships with ourselves and others, respect and care for the planet, and union with God? To put it in Jesus’ words, does it bear good fruit?

Not only is this a kinder approach to the question of sin, but it’s also simply more helpful and beneficial in directing us towards living the lives we want to live. Who doesn’t want more good fruit in their life? More love, joy, peace, patience, kindness, generosity, faithfulness, gentleness, and self-control?

It isn’t just that we don’t label things as ‘sin’ anymore because we’ve largely lost the plot about what sin is, but for the most part we have also lost the vocabulary for talking about individual kinds of sin. For most North American English speakers, envy and jealousy have merged, even though they once described very different attitudes towards inappropriate attachments (envy being ‘wanting what someone else has’ and jealousy being ‘wanting to keep what is yours’). ‘Licentiousness’ and ‘fornication’ have become laughable words, understood as being equal parts quaint,  out-of-touch, and extreme. I don’t mourn the loss of this vocabulary; and we still understand those things as missing the mark; we just label them with other words, usually consisting in some combination of three- and four-letter words we might not want children to overhear. The average person on the street may not know what a ‘licentious carouser’ is, but he certainly knows what a jackass is.

My point in writing all this is simply that we’re in a weird place with sin. We understand it more and more and expect more and more from each other, while having fewer and fewer ways to talk about it. Rather than abandoning the concept of sin, I hope we can reclaim it, not by reinforcing dated, unhelpful, and simply wrong ideas obsessed with eternal damnation, but leaning into the richness of those meaty biblical metaphors — missing the mark, impaired boundaries, debt, a meandering path, loose screws, and so many more — that help us to see clearly where change needs to happen and draw us into better lives and better relationships.

47 thoughts on “Missing the Mark (or, Talking about Sin)”