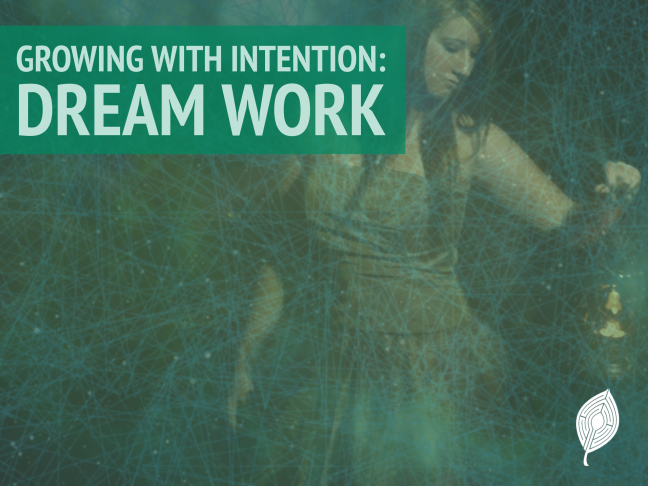 The most recent post in this series on Growing with Intention introduced making what is unconscious conscious as an engine of our spiritual development. Today I’d like to look at one specific way we can work with this idea, dream work.

Spending time engaging with our dreams is the paradigmatic approach to working with the unconscious in Jungian thought, so let’s start once again with Jung. His approach to dreams is based on four general principles, which have since been widely appropriated by others interested in dreams and the unconscious:

Because I spent so much time on Jung in the last post, I thought it would be interesting to look today at how dream work is understood in a more intentionally Christian framework. The discussion that follows will be based primarily on Wilkie Au and Noreen Cannon Au’s wonderful (and oft-cited here!) book The Discerning Heart, in which they blend his background in Jesuit theology and spiritual direction with her background in Jungian analysis to offer a profound, informed, and faithful approach to discernment and spirituality today. In their chapter on dreams, they write:

Each night while we are sleeping the dreaming self is at work gathering from the unconscious information that is relevant to our daytime concerns. …By contributing data from the depths of the unconscious, dreams expand our perspective in decision-making, often offering considerations that we in our waking moments would not have seen (166f).

While dreams have been understood as an important spiritual resource in most cultures throughout history, they have come to be undervalued, if not outright rejected, as sources of wisdom in Christianity. This is part of a larger distrust of the personal life in our tradition; for most of Christian history, the fears of people being led astray have greatly outweighed any sense of the benefits of discovering genuine wisdom in anything aside from dogma and official liturgical and sacramental practices. (See my posts addressing this in my ‘Magical Thinking’ and ‘Sanctified Imagination’ series if this concern interests you.)  But, this distrust of personal spirituality and wisdom doesn’t mesh with the witness of the Scriptures themselves. This is particularly true when it comes to dreams. Here’s a quick survey to remind us of just how prevalent and important dreams are in the Bible:

This prevalence of dreaming in the Scriptures is an invitation for us to explore what our dreams may be trying to tell us.

By far the most memorable and important dream I’ve had happened eleven years ago, just after a close friend died from cancer. She had consistently downplayed the severity of her illness to me, and in the aftermath of her death I was feeling angry at her for not being honest with me and guilty for not having been more present with her in her last months. But shortly after the funeral, she appeared to me in a dream, telling me to let go of my anger and guilt because it had been her choice and had nothing to do with me. I woke up feeling warm and light and all of my big feelings had dissipated.

Of course, it’s rare for a dream to be this straightforward. Most of my dreams are confusing to the point of being chaotic. But as I’ve been intentional about working with my dreams, I’ve come to see common motifs emerge from the apparent chaos and am slowly understanding the symbolic dreamscape of my unconscious. Because dreams operate in the language of symbols and archetypes, we need to take great care in interpreting them. This is why it’s called “dream work.” We need to sit with them, spend time with them, and explore the symbols with both openness and discernment. This stands to reason; if the theories about dreams are correct, they are the unconscious trying to tell us in the primitive, pre-linguistic means available to it about things we are not consciously aware of. This is going to take effort.

There are generally five major steps involved in dream work. Whether in a dream journal or with a trusted friend or advisor, consider the following questions:^

I am by no means a Jungian ‘true believer’, and still have questions about the validity of my dreams and amplifications of them as true sources of wisdom. But I can definitely say that over the time I have been working with my dreams more intentionally, I have seen a progression that seems to match positive shifts in my conscious life. Whereas my dreams used to be filled with standard anxiety tropes such as not being prepared for a test or being chased, the more I’ve sit with my dreams, the more supportive they have become. For example, motifs suggesting an inability to speak out have largely disappeared as I’ve spent time with those symbols and become bolder in my speech in my conscious life.

Dream work is not the be-all-end-all of spiritual practices, or even work with the unconscious. But, I’m becoming convinced of the benefit of dream work as one helpful tool in the toolbox of bringing the unconscious into conscious awareness, and ultimately, for spiritual growth. And so, I would encourage you to grab a journal and pay attention to what your dreams are telling you.

* For further discussion of these principles, see Anthony Stevens’ contribution on Jung in the Very Short Introduction series by Oxford University Press.

^ These instructions are based on those in Susan M. Tiberghian’s excellent Writing Toward Wholeness (Chiron Press, 2018).