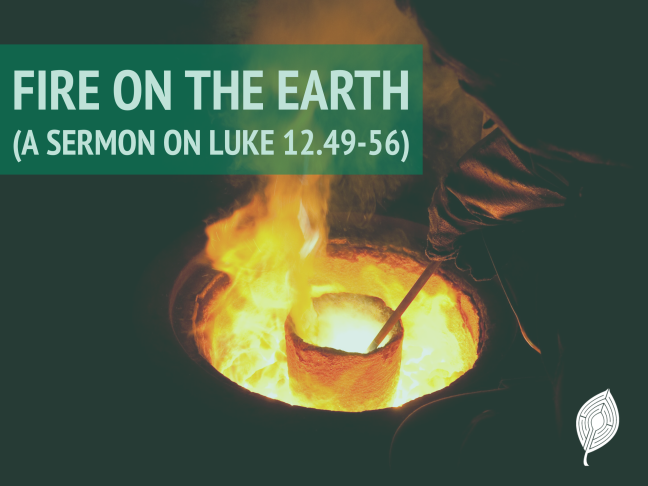 As many of you know, I work in the public sector. One of the things I love about working in this environment is that it gives me the chance to talk to a lot of different people from different faith communities and at different places in their spiritual journeys.

I remember one conversation a while back with a colleague, who grew up in the church but hasn’t been involved with any faith community in many years. In this conversation, she started talking about how awesome Jesus is.

“Oh yeah,” she said, “Jesus is just so cool. Just lounging with his disciples preaching love and non-violence. Just, like, everyone’s best buddy.”

As I reflected on this assessment, I couldn’t help but think that the man she was describing sounded more like my hippie friend Mark back in Victoria than it sounded like Jesus.  The Jesus she was describing was to a significant extent one of her own making — a completely non threatening and unchallenging Jesus who looks a lot like her and her own values.

I don’t share this story to make fun of my friend at all. But rather because, most of us in this room can probably relate.

We like Jesus to be meek and mild, compassionate and gentle. We like the Jesus who says things like “Come to me, all you who are weary and burdened, and I will give you rest;” the Jesus who commands us to love one another; who blesses his persecutors and has compassion on the hungry and hurting.

But this warm and fuzzy, non-threatening, comfortable Jesus isn’t the Jesus of the Gospels. THIS Jesus, while certainly loving and compassionate, also does things like vandalize merchant stalls and say abrasive things like “How hard it is for a rich man to enter the Kingdom of Heaven.” and “Take up your cross.” And it’s this side of Jesus we get in today’s Gospel reading.

“I came to bring fire to the earth, and how I wish it were already kindled!”

“Do you think that I have come to bring peace to the earth? No, I tell you, but rather division!”

These are hardly what the Book of Common Prayer would call “comfortable words”! Nevertheless, they are words of our Lord; and therefore — as tempting as it may be to look the other way today — it’s important for us to dig down into these uncomfortable words from Jesus.

But how? How can we reconcile this side of Jesus — the Jesus who brings fire and division — with our image of Jesus as the Prince of Peace?

The key is to ask ourselves: What do we mean when we talk about Peace? Too often we think about peace in terms of the absence of conflict. As long as gun violence is in some other part of town, as long as there aren’t riots in the streets, as long as our sons and daughters aren’t dying at Vimy or the Somme, we’re at peace.

But, this comfortable, milquetoast peace is not real peace. It is not the peace to which God calls us. It is not the peace of which our Lord is the Prince. In fact, an absence of conflict often masks deep structural violence: in our homes, in our country, and in our world.

Instead, God’s peace is the peace of shalom: Not the absence of conflict but the presence of justice, of wholeness, of right relationships. This isn’t a peace that’s about holding hands and singing kum-ba-ya. It’s a hard peace, a peace that requires deep structural changes to realize, both in society and — perhaps harder yet — in our hearts.

This is the peace of which we are called to be makers, agents and ambassadors.

No. The world’s peace isn’t good enough. God is calling us to something greater.

And far from the fake peace of this world, telling the truth requires conflict. And so there’s a gulf between the world’s peace and God’s peace. The world’s peace looks beautiful on the outside but is rotten in its core. God’s peace is messy on the surface, but is the outworking of something beautiful and true.

And, friends, we need to give up on the world’s peace if we have any hope of being agents of God’s peace. This is why Jesus says: “I have not come to bring peace but division,” division that goes into our deepest relationships: father against son, daughter against mother, husband against wife, neighbour against neighbour.

We’re seeing this gulf increasingly in our culture and this is part of why these times feel so anxious. It feels like so much of what we knew and expected is being uprooted and set ablaze. Old social and political certainties are being revealed as a house of cards. And no wonder. Our culture has celebrated peace while ignoring deep injustices simply because people were willing to stay quiet.

But one of the blessings of this time — a challenging blessing to be sure, but a blessing nonetheless — is that people are talking.

People who for generations were silent are finding their voices and speaking truth. We’re having conversations in culture and the Church that have never been possible before: honest conversations about abuse, gender, race, sexuality, colonialism, privilege, marginalization and all the complicated places where all these things intersect.

It’s not that there is more injustice in the world than there used to be but that we’re becoming more aware of it.

The world isn’t more complicated than it once was, but we’re at least beginning to see just how complicated it is, and how few people the old certainties and simplicity actually served.

Naturally, the few this old order did benefit are pushing back right now, often violently.

These are the signs of our times.

And so we’re in a very difficult moment. Whether it will destroy us or become a source of creativity and new life largely depends on us.

Are we going to stop our ears to uncomfortable truths or are we going to be strong, brave, and committed enough to open not just our ears but our hearts too?

It’s funny in a way, how when we hear Jesus talking about wanting to bring fire to the world, we are immediately filled with scary apocalyptic visions. I say it’s funny because this isn’t how the image of fire works in our tradition. The most important images of fire in our Scriptures and stories are overwhelmingly positive:

What if WE are the fire that our Lord longs to be kindled?

The epistle reading today contains a list of heroes of faith, men and women who had to make difficult choices and endure the hardship and conflict that came from following God’s heart.

Each one had to watch pieces of themselves burn away for the hope of something better:

To these we can add more recent heroes of faith:

The Quaker abolitionists who had the bravery to insist that a strong economy and prosperity were EVIL if they were built on the EVIL of slavery;

Martin Luther King Jr, who had the audacity to oppose not only the oppression of his own people, but to insist that every single man, woman, and child on the planet deserves to be free from injustice, war and hunger;

Or, one of my personal heroes, the Soviet Dissident priest Fr. Alexander Men, who warned against the nationalism he saw infecting the Russian church in the late 1980s and was rewarded with an axe blow to the head for his troubles.

I bring up Fr. Alexander because, in one of his talks that were transcribed and smuggled across the Soviet Union, he said something very fitting for what Christ has to say to us today:

Often what passes for Orthodoxy or another Christian confession is simply natural religiosity which, in its own right, is a kind of opium of the people. It functions as a sort of spiritual anesthetic, it helps a person adjust to his surrounding world, over which he can hang the slogan, “Blessed is the one who believes that it is cozy in the world.”…This is all wrong! … Your religion does not consist in this at all. Your God is a consuming fire and not a warm hearth, and he is calling you to a place where all sorts of cold wind are blowing.

This has been a challenging message today from our Gospel. But being challenged isn’t a bad thing. God is calling us to a bigger life, to be agents of God’s better peace.

Our Lord said today that he came to bring fire upon the earth. May we all be brave enough to be set ablaze by this fire. May we all be prepared to become all flame.