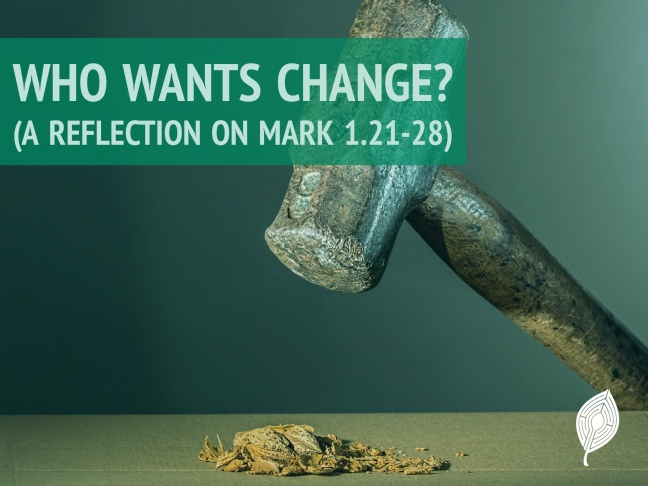 One of my favorite cartoons features two panels. In the first, a speaker addressing  a crowded room asks, “Who wants change?” And everyone puts up their hand. In the second panel, the speaker asks, “Who wants to change?” and all the arms go down. Like so many cartoons, it’s funny because it’s true. It hits at a contradiction deep within the human condition: we simultaneously desire a better world (however we may see it) but are either unwilling or too afraid to put in the work to make it happen. This has been on my mind a lot lately, and I even touched on it a bit in my reflection after Christmas, in which I wrote: “…we often live trying to maintain a kind of homeostasis, preferring the comfort of what we know to the challenge and change of what might be.” In his classic book Mastery (1992), educator and Aikido master George Leonard wrote: “Every one of us resists significant change, no matter whether it’s for the worse or for the better. Our body, brain, and behaviour have a built-in tendency to stay the same within rather narrow limits, and to snap back when changed — and it’s a very good thing they do.” But, as he points out later, “The problem is, homeostasis works to keep things as they are even if they aren’t very good.”

This came to mind again this morning in my Lectio Divina practice. The Gospel appointed for today is Mark 1.21-28, in which Jesus casts out some demons in Capernaum. In the story, one of the afflicted men cries out to Jesus, “Did you come to destroy us?” The fear and anger behind that question jumped off the page at me this morning. It seemed so human. So often change feels like a threat to us. It feels like we’re about to be destroyed. Perhaps the case of a demoniac like in this story feels too distant to relate to, but it’s not dissimilar to the famous story from St. Augustine’s Confessions, in which he asked God to make him chaste, but not yet.

Was Jesus coming to destroy the man? Well, yes and no. Sadly for the people in the cartoon and for us, there is no change without us changing. My first lesson in this was well over a decade ago now, when I was confronted with my need to forgive someone in my family. I had years of complaints and hurts — justified and not — stacked up against this person and as much as I knew I needed to forgive, I simply couldn’t. My heart needed to be changed in order for that to happen. That process felt like destruction — holy destruction, but destruction nonetheless. Brick by break, it felt like God was taking me apart. But, crucially, God also built me back up, brick by brick.

Healing comes in many ways, some dramatic but most mundane. God works through modern medicine just as well as miraculous intervention, and through the concern of our friends and allies as much as ecstatic experiences. The question is do we want it? Do we want to change? Are we willing to risk what we know for the sake of a better, richer, fuller, more whole future? These aren’t questions we can say ‘yes’ to wholesale. If we’re honest with ourselves, we need to say ‘yes’ to being changed every day. But, for the sake of our lives and our world, I hope and pray that we will — and I will — have the courage to say yes, and open myself up to the change I need.