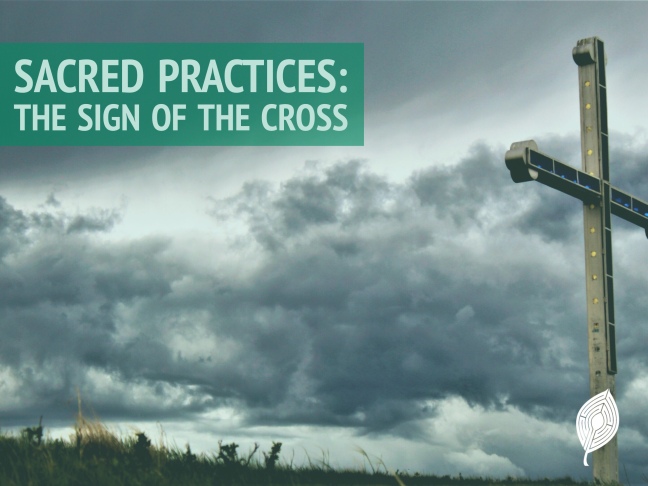 Last week’s exploration of Minimalism as a sacred practice made me think about how I might similarly simplify my spiritual life. I thought about what it might look like to go back to the basics. And so, for this week’s practice, I returned to a venerable Christian practice of prayer, protection, and identity that dates from at least the turn of the third century. This week, I explored the Sign of the Cross.

While it seems foreign to most Protestant Christians today, as far as we can tell, making the sign of the cross was as close to a universal practice among Christians as there was in the early Church. Tertullian, writing in North Africa at the start of the third century, referred to the practice as “long-standing” even then. Not only was it well-established, but it was also pervasive in Tertullian’s Christian experience. He wrote, “In all our travels and movements, in all our coming in and going out, in putting off our shoes, at the bath, at the table, in lighting our candles, in lying down, in sitting down, whatever employment occupies us, we mark our foreheads with the sign of the Cross” (De Corona Militis iii). From my own experience of Eastern Orthodox Christianity, I can attest that a similar pervasiveness of this practice remains in that tradition to this day. Contemporary Western Christian practice is more varied, with some Roman Catholics making the sign of the cross in most of the same contexts as their Eastern Orthodox cousins, but many Protestants not doing it at all, despite having been commended by Martin Luther. In my “Broad Church” Anglican experience, it has been seen as an optional practice, and almost entirely limited to liturgical use. But in other Anglican circles, the sign of the cross has retained a place of greater importance.

For a practice with such a long history, the rationale behind making the sign of the cross is not entirely obvious. The cross is after all an implement of torture. On the surface, making the sign of the cross as an act of blessing or protection seems as odd as making the ‘sign of the electric chair’ or the ‘sign of the lynching tree.’ Yet, for Christians, the cross is much more than a symbol of death. It is also a symbol of salvation and of God’s power. In more contemporary language, it is the symbol of God’s solidarity with the oppressed and God’s vindication of the innocent who are crushed by the powers of the world. For Christians, the cross as a symbol of death and despair is transfigured into a symbol of life and hope, even as death itself becomes, in Fr. Alexander Schmemann’s famous words, an act of communion with life. Though we will undoubtedly “walk through the valley of the shadow of death,” we “fear no evil.”

And so the cross is not only our inspiration but is the content of our Christian identity and life. By marking ourselves and others with this symbol, we remind ourselves of and enact our identification with Jesus and the way of the cross, with both its recognition of the reality of suffering and danger and its promise of God’s presence and ultimate vindication.

As much as this week’s practice is one of the simplest and easiest I’ve explored this year, because it’s unstructured, I found it one of the most challenging to do consistently. It’s something that is habit and routine and so I think, ideally, it builds to be automatic, like brushing your teeth. That said, I was able to remember to do it several times each day and so it wasn’t an entirely lost cause.

I’ve written almost every week about how sacred practices seem to be about intention and attention; yet, this practice I felt was at its most potent when I thought about it the least. As I was thinking about this difference, I realized that where intention and attention come in here is where they do for any habit: at the beginning. Several years ago I set an intention to clear clutter immediately from my living room; while it took a fair bit of attention at first to make that happen, it’s now something routine that doesn’t require any thought. And as I think about it, this process of habit formation has been consistent with other sacred practices I’ve maintained for some time. For example, even something as intentional as the Ignatian Examination of Conscience I’ve found to be less helpful as time has gone on — not because the process of examination is not fruitful, but because to some extent I’ve begun to internalize the questions. Similarly, in time, making the sign of the cross becomes habitual, an instinctive and immediate identification with Christ, the Cross, and one’s faith in a moment of anxiety, prayer, or new beginning.

I used the word ‘identification’ in the previous sentence, and, for me these days at least, this is how I best engage with the meaning of a practice like making the sign of the cross. In that moment, when I am facing a fear, interceding for a friend, or even leaving the house on a morning run, I am bringing to mind and heart my source of strength, hope, courage, and comfort. It is wordlessly praying Saint Patrick’s Breastplate:

And yet, as much as this sense of identification with the Gospel resonates with my heart, I also know that it’s less than the fullness of what the practice is about. The sign of the cross has historically had a performative sense to it; it isn’t just that one is identifying with Christ and his passion, but in some way calling upon or activating its protection and grace into one’s life in the moment. (The Breastplate itself acknowledges this with its language of “binding” oneself to Christ.)

To be a little confessional here, I have to admit that since my Christian faith reasserted itself a few years ago, I’ve struggled with this question of ritual and performative language. Does anything really happen when we pray, when we receive the Eucharist, when we make the sign of the cross? My theology and spirit (for lack of a better word — I’m referring to something that feels like ‘the fire in my belly’) insist that, yes, something does happen. For Christianity has never been about pulling oneself up by one’s bootstraps, but about receiving life as a gift from God. And yet, my this is one of the many instances in my life when I have to try hard not to learn the lessons my life experiences seem to be teaching me. While I once was a ‘True Believer,’ knowing deep within that it was all true, life has done its best to shatter that faith and trust. It’s far easier for me to believe that I’m on my own, that there is no practical help from God in my day to day life and that God is indifferent to my concerns and struggles. Yet I also know that cynicism and disbelief are always the easy way out. And so, I still choose to believe that my disappointment and disillusionment are not the end of the story. In a way this shouldn’t come as a surprise as a Christian. One of my favorite theologians, Fr. Alexander Men, referred to the whole life of the Church as a “paschal mystery” — that we should never be discouraged by the sorry state of the Church because, being the Body of Christ, it is always being crucified, and always being resurrected. I think for most of us, faith works the same way; it too is a paschal mystery.

Which is a handy way to come back to the sign of the cross. Because even in a place of doubting what God is really about in my life, making the sign of the cross is still a powerful act of faith. It is still a determined witness that the vicissitudes of life — and far more my feelings about them — are not the end of the story. That there is more, whether I can see it, or understand it, or not. And so, as I’ve come to the end of my week reflecting on this practice, I think I’ve come to something of a middle ground: maybe not trusting as I wish I could that making the sign of the cross does anything outside my own psychology, but acknowledging that is itself an act of trust in the midst of doubt.