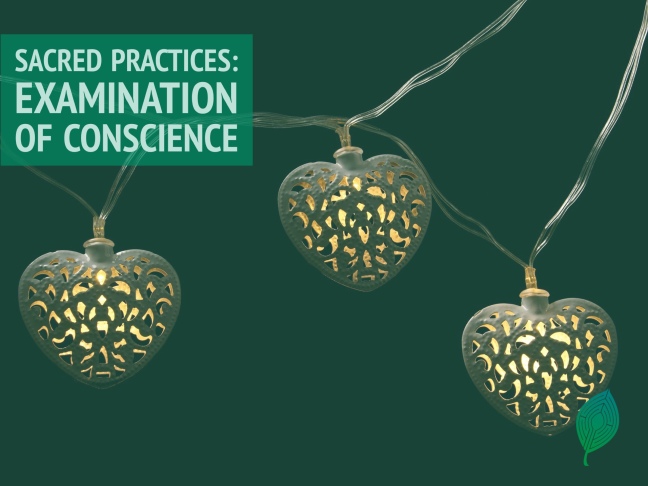 Lent is a time of a preparation and self-appraisal, a time to see as clearly as we can the lay of the land of our souls. One tool that I have found helpful in this process, whether in preparation for sacramental confession or just to be more aware of the business I have to do with and before God, is the examination of conscience. While an examination of conscience would normally not be done daily — traditionally it would be done as preparation for sacramental confession — I thought it would be helpful to contemplate in this intentional space in this lenten season.

Examinations of conscience by one name or another have arisen in many religious traditions. And it’s really no mystery as to why: Wherever there is a set of values one aspires to follow, it makes sense to touch base periodically to see how one is living them out. I first encountered this practice as an exercise in preparation for confession in the Eastern Orthodox Church and found it to be so helpful that I have continued to do examinations of conscience periodically even though I am in a tradition that places a lesser value on individual sacramental confession.

For every item in the Scriptural inventory, try to ask yourself probing questions beyond the surface. For example, in an examination of conscience based on the Beatitudes, under “Blessed are the meek, for they shall inherit the earth,” some of the questions I would ask are:

There are several templates for examinations of conscience available online, mostly from Christian and Buddhist sources. (Incidentally, as a Christian, I do find the Buddhist examinations of conscience helpful, as they often come at similar values from a different angle, which helps to point out the blind spots in how my own tradition has come to articulate some of those values.)

I have added the templates I used this week, which I have cobbled together from various sources over the years, to the Resources section of the site for your reference and use if you’d like.

This is a practice I like, however, it felt very repetitive to do it daily: the ways I tend to sin don’t really change much from day to day! I mitigated this a bit by using a rotation of different examinations of conscience this week. Normally, I just wouldn’t do it as often. Weekly seems enough to be helpful without being too repetitive.

Aside from the repetitiveness (If I’ve said it once, I’ve said it a hundred times: Sin is boring) I didn’t find the practice difficult. My main struggle was the one I always have with examinations of conscience: It’s very easy for me to slide into an examination of consciousness all the time rather than focusing on concrete actions, attitudes, or incidents. I’ll discuss this more in the reflection below.

I truly believe examinations of conscience are very helpful, and potentially revolutionary, in one’s spiritual life. Thoughtful reflection on how my values and how I actually live my life match and don’t match is profoundly illuminating. Using a text like the Beatitudes or Fruits of the Spirit can shine an uncomfortably bright light into my heart and reveal a lot of things that need attention that had slipped past me unnoticed at the time. This is very helpful in allowing me to make a full and honest confession before God.

Related to this, the probing questions can be helpful in correcting imbalance in thoughts about sin. In my case, as I mentioned above, I struggle with abstraction of my sin. While I appreciate the big picture view that this allows me, on the flip side, it means that I can tend to miss the concrete day-to-day interactions in which I’ve missed the mark. It’s so much easier for me to say “I am selfish” than it is to say “Three ways in which I acted selfishly are: X, Y, and Z.” But X, Y, and Z are where life actually happens. And so, this week I found myself consistently having to turn back to concrete examples rather than generalities. This isn’t in any way a criticism of the practice: it’s the practice helpfully doing exactly what it’s intended to do. Crucially, the opposite benefit could be true for someone else. I have friends who talk about sin only in very narrow and specific terms, as though sinfulness were only about the two pens they took from work, without any exploration of the thoughts and motivations behind that act. For people like this, who overly concretize their sin, the probing questions can help to expand their horizons and allow them to see more broadly than they might normally be able to see.

In my experience, this practice has also allowed me to ‘paint the dragon red,’ so to speak — to give something I’ve experienced a more accurate name as I bring it before God. The best example I can provide will undoubtedly be controversial for some of those reading this, and if this is the case for you, I ask for your forgiveness and grace in advance. As I’ve mentioned before, I spent the first dozen years or so of my adult Christian life as a non-affirming gay man. For years, when I approached confession, I would pack everything about my sexuality into the category of ‘lust’ without any unpacking or exploration. But one day, during in an examination of conscience, like a bolt of lightning from on high, I came to realize how little of my behaviours and attitudes surrounding my sexuality had to do with lust. They were in fact almost entirely motivated by loneliness. By labeling it all as ‘lust’ not only was I bringing important areas of my life to God in a way that wasn’t true, but I was also blocked from addressing the actual issues. And while it still took a long time and some very difficult and painful experiences before I could address my sexuality in a different way — and longer before I could bring it into a context of faith — this experience was nonetheless a huge earthquake of clarity and truth in my soul, and was among the first things that really shook the foundations of the beautiful house of cards that was my life at the time. The specifics of the story here are less important than the basic point: If we take examinations of conscience seriously, they can help to clarify what we’re up against.

And so, for these three reasons — revealing what we’re prone to miss, balancing out our tendencies to either abstraction or hyper-concretizing, and naming what we’re up against correctly — I find examinations of conscience to be a very helpful sacred practice. (Just maybe not every day.)

6 thoughts on “Examination of Conscience”