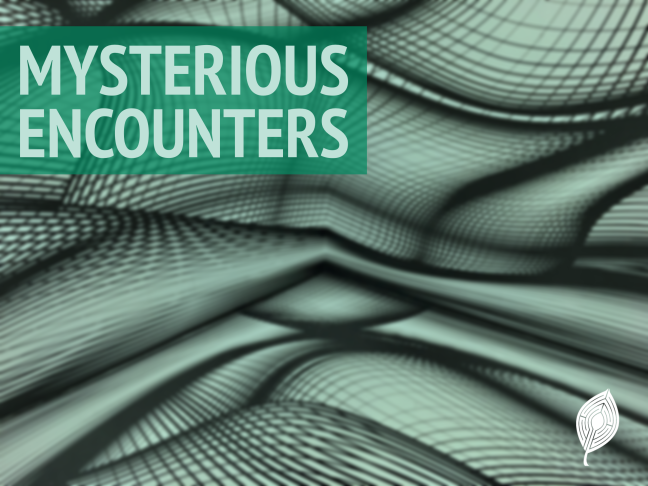 The past posts in this series on knowing God have insisted on two paradoxical things: First, that our words, concepts, and experiences can never adequately describe God, and second, that God can nonetheless be known.

With this in mind, the best word to describe God is probably Mystery. Contrary to what popular literary genres might suggest, a mystery is not a puzzle to be solved. Rather, it is a boundless truth. Like a koan, such as the famous “Listen to the sound of one hand clapping,” a mystery isn’t about using our thinking minds to find an answer, but about exhausting them in order to reveal a deeper, intuitive, and experiential truth that the mind can never grasp.

The Hebrew Scriptures contain several stories that highlight the mysterious and ineffable quality of God. It’s fair to say that the theophanies in the Bible are all designed to confound the intellect, and to hide as much as they reveal about God. For example, YHWH appears to Abraham in the form of three men (Gen. 18); his grandson Jacob later encounters God as a physical adversary with whom he wrestles for a whole night while camping alone (Gen. 32). Moses meets God in the fire of bush that is burning but not consumed (Ex. 3) and later in a dark cloud that left his face glowing with light (Ex. 34); when God reveals the divine name to Moses, it too is shrouded in mystery: “I am what I am” or “I am the One who is” — it almost reads as a rebuke more than a revelation: “You want to know who I am? Well, I am what I am and will be what I will be.”

Later in the Scriptures, Job meets God in a whirlwind (Job 38-42) and his complaint against God is not answered as much as it is subsumed into the mysteries of the created world. And finally, the prophet Elijah encounters God not in the elements of nature like Moses and Job — not in the sudden succession of powerful natural phenomena of wind, earth, and fire that greet him on the mountain where he is hiding — but in something that we know of as “the still small voice,” though it is perhaps better translated “the sound of silence” (1 Kings 19).

What is so striking about all these stories is the consistent juxtaposition of opposite ideas or terms. Abraham’s story begins: “The LORD appeared to Abraham … He looked up and saw three men.” This interplay of oneness and threeness persists for the whole story. Jacob’s story starts with a similar narrative jolt: “Jacob was left alone; and a man wrestled with him until daybreak.” And while Jacob wrestles with a man, he leaves the encounter saying “I have seen God face-to-face.” Moses meets God in a bush that is burning but is not consumed by the fire, and in darkness that leaves him shining with light. The divine name is revealed but is itself shrouded in mystery and is no name at all. Job receives an answer that is no answer. Elijah hears God in the sound of silence.

Oneness and threeness, aloneness and encounter, human and god, aflame and yet not burning up, darkness and light, a name that is not a name, an answer that is not an answer, the sound of silence — These are the ways our most ancient stories talk about meeting God.

These are great stories that are well worth our time and attention. I have already done integral readings of the stories of Jacob and Elijah, and in the coming weeks, I’ll be doing the same for some of the others. But, taken together, all of these stories show us that an encounter with God stretches human thought and language past its breaking point. There is a theme of simultaneous unknowability and knowability, and of a God who continually confounds expectations, who cannot be expected to act or be revealed as God ‘should’.

At the same, time, they also tell us that a genuine encounter with God is not just revelation-for-the-sake-of-revelation, but produces a fundamental transformation in us. Abraham is changed by the long-awaited fulfillment of God’s promise to him of an heir through his wife Sarah. Jacob is given a new name and the gift of a new identity not tied to his dysfunctional relationship with his brother. Moses is given a mission to free Abraham’s descendants from slavery at the burning bush, and in the dark cloud of Sinai is given the Law. Job leaves his theophany humbled and God then restores to him the wealth he had lost. And Elijah is offered a new path for his ministry, away from grand gestures of divine power toward the humbler — but ultimately more productive — work of releasing others into their own service.

This is the same message we saw in the Epiphany story this year, and it is important for all of us who seek God to remember: To encounter God means to have our expectations overturned, our plans changed, our outlook transformed, and our minds and words stretched beyond their natural limits. It is good and important to seek God. But once again, we need to ask ourselves, are we ready for what we will find when we meet God? And are we ready for the change it will demand of us?