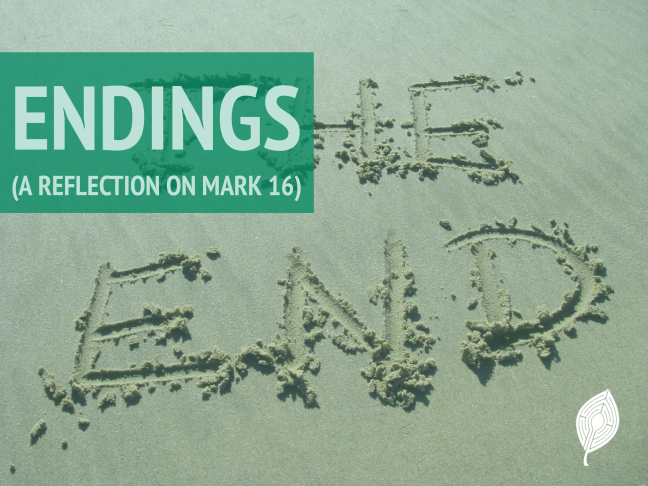 Endings are arbitrary and illusory. “The End” is never really the end.

Just think of most of our conventional story endings: the guy gets the girl, the hero saves the day, “they lived happily ever after,” and the underdog comes out on top — none of these are actual endings at all: the guy may get the girl, but does this ‘getting’ result in a lasting and fulfilling relationship? The hero may save the day, but what about the next day, and the day after that? “Happily ever after” yada-yada-yadas most of a life. And what happens when the underdog is no longer an underdog? This is why sequels excite us but also disappoint us: they open the veil into the unknown that lies beyond “The End”, but to do so they must undercut the illusion of our (usually happy) endings.

I was thinking of this this morning because the Gospel appointed for today is the “longer ending” of Mark. Many of the oldest manuscripts of the Gospel according to Mark end at 16.8. It’s an awkward ending. 16.1-8a are subtle and cautious and leave a reader feeling a bit uncertain (It feels a little postmodern in that way): Jesus appears to a small group of disciples and they hold their tongues out of fear. But this tension is resolved — without much narrative satisfaction — by 8b: “And afterward Jesus himself sent out through them, from east to west, the sacred and imperishable proclamation of eternal salvation.” It almost reads as though the evangelist ran out of space as he was writing and compressed a chapter’s worth of material into a single sentence.

But there is a second, longer ending to Mark, which either skips over 8b or incorporates it, and goes on to briefly describe more of Jesus’ post-resurrection appearances. It’s a “better” ending, and that’s no doubt why it was added.

Real life works like this too. Think of how you interpret your life now versus how you thought about it five or ten years ago. The passage of time and the continuation of the story changes the story itself. This is why I’m always surprised when people in their 20s and 30s write memoir. There is still so much story to go!

Even something as apparently final as death isn’t really an ending, because life keeps on going for those impacted by it and the life that preceded it: How does the death of a mother impact the life of her children? Her husband? Her community? How is she remembered? And how does that memory influence others for years to come? Death isn’t really the end of someone’s story — and that’s even ignoring belief in eternal life.

These thoughts about the illusory nature of endings make me think of the disciples in the upper room in the two days between Jesus’ death and his resurrection. They were convinced that the story of Jesus, and therefore a life-changing and hope-filled part of their own story, had come to an end. Not with the leading question mark of Mark’s short ending, or the exclamation mark of its longer ending, but with the cold finality of the period of the cross. Full stop. But that wasn’t the ending God had in mind at all, for Jesus or for them. Soon they would all be sent to the ends of the known world to share the good news that God had raised Jesus from the dead, destroying death by death. Their story was just beginning.

Their story was just beginning. And so is ours.

No matter where we are in life, our stories don’t end in periods or in exclamation marks or even question marks. Such finality is an illusion, a glamour, a lie. The only way stories really ‘end’ is with “To be continued…”

One thought on “Endings (A reflection on Mark 16)”