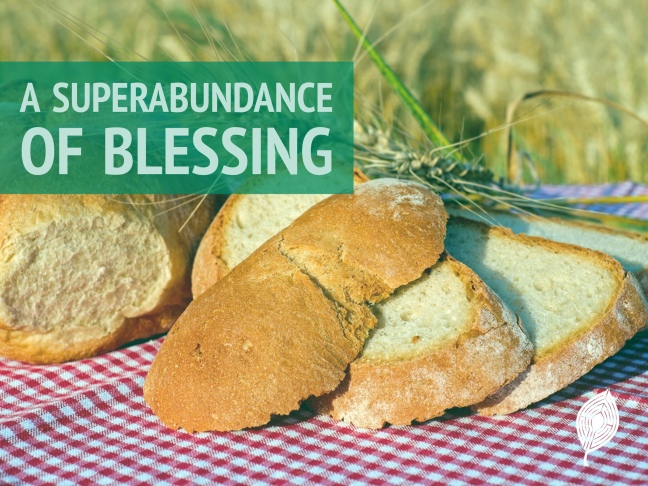 I’ve been haunted this week by a line from Sunday’s Gospel reading. The Gospel appointed for Sunday was John’s telling of the story of the feeding of the five thousand. After the small amount of food brought forward is blessed and distributed and everyone has their fill, Jesus tells his disciples, “Gather up the fragments left over, so that nothing may be lost.”

For whatever reason, this line has stuck with me the past couple days. On a practical level, it’s a reminder and challenge to redouble my efforts to reduce food waste. This is always a needful reminder. But, of course, we know that this story isn’t primarily about food. While the story is not set up as a parable, it does seem to function like a parable in Jesus’ mind. In fact, later, in a moment of frustration, he chastises those who are more excited about their full stomachs than they are about what the sign means.

The details of the story John tells here are rich in symbolism: The three places in the story are not only archetypical, but also deeply connected to the Exodus story, Israel’s founding national myth of God’s freeing them from slavery: The mountain as a place of revelation and theophany and as the place where Moses receives the Law; the wilderness as a place of physical and spiritual struggle and as the place where the Hebrews were fed with manna from heaven; and the sea as a barrier — a kind of border wall, if you will — and as a barrier that God miraculously allows the Hebrews to cross. In John’s telling, the feeding of the multitude takes place around Passover, the liturgical commemoration of the events of the Exodus. So it would seem that John is setting up these events as a recapitulation of the Exodus. And so, we should be primed to hear this story as starting with “The Kingdom of God — the True Freedom of God — is like …” And as the story goes on, we learn the rest of the sentence: “The Kingdom of God is like a feast with a superabundance of food, and none of it is to go to waste.”

What a beautiful image. It reminds me of Psalm 133 and the image of God’s blessing overflowing over the head of the high priest: “It is like the precious oil on the head, running down upon the beard, on the beard of Aaron, running down over the collar of his robes.” Yet here, this superabundance of blessing is not simply to stain Aaron’s robes or drip all over the floor. It is not meant to be wasted, but to be put to use. It is not meant just for Aaron, but is to bless others as well.

There are two things that stick out to me here. The first is the image of bounty or abundance. So often we live out of a sense of lack, whether physical, financial, or spiritual. And certainly, one of the hard lessons the twentieth century taught us was that the planet, which is rich in its blessings, is still a finite place of finite resources. The odd thing, however, is that we seem to be far more tempted to apply this lesson to our spiritual life than our material life. We want to go on with our rampant consumption of the finite resources of the Earth, yet have a scarcity mindset when it comes to love, grace, and compassion. But, the Kingdom of God is not like this.

The Kingdom of God is like a small meal that not only feeds five thousand people, but produces twelve large baskets of leftovers. Not only is there enough in the Kingdom of God, but there is abundance.

And secondly, this abundance is to be used to bless others. We pay forward the grace God has given to us. Sure, this can be about how we use the resources of time, money, and food we’ve been given, but really it’s about our attitudes towards others. God has abundantly forgiven us; do we abundantly forgive others? God has had compassion on us and has wept with us; do we grieve with the grieving and sorrow with the sorrowful? God has given us gifts, talents, and skills; do we use them for the sake of others? And do we raise up others to use their gifts too?

This is the true bread of God that comes down from heaven and gives life to the world.

Lord, give us this bread always.