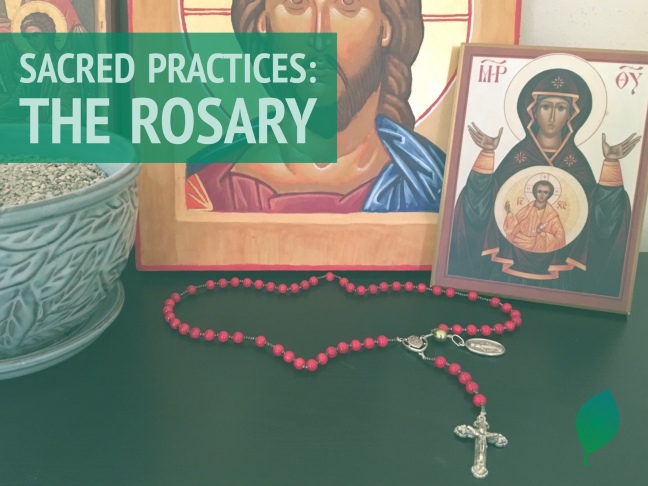 So far, the sacred practices I’ve explored here have all been ones with which I’ve had at least some experience. This week I’ve entered what is for me uncharted territory, a practice that is beloved by millions around the world, but has always confounded and confused me. This week, I am practicing praying the Rosary.

While many traditions have used beads as a tangible aid to prayer, in no tradition has the practice become as synonymous with the devotion of the faithful as it has with the Rosary in Roman Catholic Christianity. The Rosary emerged as a practice distinct from earlier prayer bead traditions at some point in the Middle Ages, and has seen a continual growth both in popularity and official reflection in the centuries since. The nineteenth-century pope Leo XIII issued no less than seventeen official documents on the use of the Rosary, and it has since also become connected with visions of the Virgin Mary at Lourdes and Fatima.

Because of the practice’s strong connection to Marian devotion, and the potential ways such devotion can sometimes go sideways, recent Roman Catholic thought on the Rosary has emphasized the christological origins of all genuine, orthodox devotion to the Virgin Mary. For example, Romano Guardini insisted that the Rosary was “participation in the life of Mary, whose focus was Christ.” In 2002, Pope John Paul II wrote in an apostolic letter: “The Rosary, though clearly Marian in character, is at heart a Christocentric prayer. In the sobriety of its elements, it has all the depth of the Gospel message in its entirety, of which it can be said to be a compendium” (Rosarium Virginis Mariae). His successor Benedict XVI echoed this, referring to the Rosary as a meditation on salvation history.

The Mysteries contemplated for each decade change depending on the day:

For a helpful step-by-step introduction to the practice, there are many guides available online.

This was a difficult week for me. It was the first sacred practice I’ve explored here that I actively found myself dreading every morning. My initial feelings about it were that it was boring, repetitive, and trying to do so many things it ended up not doing anything. That’s a difficult set of feelings to overcome. But, recognizing that a practice beloved by millions of people can’t have nothing to offer, I continued with it. And, I can say that, while I didn’t necessarily come to a point of liking the practice as the week went on, I did come to a place of acceptance and peace with it.

Any kind of honest reflection on a practice I had such a negative initial response to needs to be begin with prejudices. While I am not prejudiced against Roman Catholicism per se — of the ten sacred practices I have explored so far in this space, this is the fourth with explicitly Roman Catholic origins, and I love the other three — I do have a visceral negative reaction to a lot of popular Roman Catholic piety. Partly this is aesthetic: I find a lot of rosaries, statuary, devotional candles, and prints to be gaudy, ugly, and kitschy. This is of course completely subjective and superficial, but it does influence my attitude toward popular Roman Catholic devotion. Even the intention of praying the Rosary felt like a step in overcoming this prejudice, but I’d be lying if I said that I overcame it entirely.

Connected to this are some of the popular ways Roman Catholics approach Marian devotion. I have no theological issue with devotion to the saints — it’s not only a logical implication of Christian belief in the resurrection of the dead, but is also deeply rooted in Christian experience. But when I hear Roman Catholics speak about Mary, I often find myself cringing. I’ve heard them say things like “I go to Mary when I’m too ashamed to go to Christ” or “she mediates between us and God” or “all grace comes from Mary.” These genuinely seem — to my ears at least — to displace Jesus from the centre of our understanding of salvation and prayer. The combination of my discomfort with such common ideas about Mary and a very Marian practice from within that same tradition also contributed to my struggle with the Rosary this week.

Moving on to the practice itself, what I found most difficult was that I had a hard time knowing what it was trying to do. Was it meditation (as the beads and mantra-like quality of the repeated words suggested)? Was it Gospel contemplation (as the focus on the Mysteries suggested)? Was the focus primarily on Jesus? Or was it primarily on Mary? Was I supposed to be speaking? Or was I supposed to be listening? How could the practice ask that I detach my words from my attention? (This runs counted to any other practice I’ve encountered, as well as to my liturgical theology.) And neither reading about it nor asking friends who have practiced it helped to clear up my confusion. While the official understanding seemed to be something like “contemplating the mysteries of Christ’s life through the eyes of his mother,” the interpretations of the faithful (and formerly faithful) ranged across the whole spectrum, from it just being a religious spin on worry beads — a way to focus one’s nervous energy in a faithful way — through it being a system of divination not unlike the Tarot, to it being the primary means God has given the Church to properly contemplate the Mysteries of faith. I really struggled with this lack of clarity for a few days: to me, it was a practice that tried to do too many things at once and therefore did nothing. Far from being a creative and spicy fusion dish, it felt like the equivalent of blending together a hamburger, beer, and mint ice cream — a great way to ruin three wonderful things.

But, as the week went on, I realized that this lack of clarity in intent and meaning was probably exactly what has allowed the Rosary to be so popular for so long: it’s something of a blank canvas, providing a space and framework upon which the faithful can do whatever it is they need. Once I came to this realization and settled on what I wanted the practice to be, the last couple days of working with it were much smoother. I was able to settle into something of a rhythm with it and witness salvation history through the eyes of its most deeply invested witness.

This isn’t to say that I came to love the practice. It didn’t seem like a particularly effective practice to me, as there are other practices that do any of the things the Rosary might do more directly. And since I’m not Roman Catholic, and therefore, won’t have a priest ‘assign’ me Rosaries to say as penance, I don’t really need to find my own way into the practice. But I’m glad I pushed through for the full week and was able to come to a place of peace with it. If nothing else it spurred me to reflection on my prejudices, prodded me to push through in trying to overcome some of them, and reminded me I should “call mom” more often and be more intentional about cultivating my relationship with Mary and all the saints. And so, even though I struggled a lot this week, in the end, praying the Rosary was worth the struggle.

2 thoughts on “The Rosary”