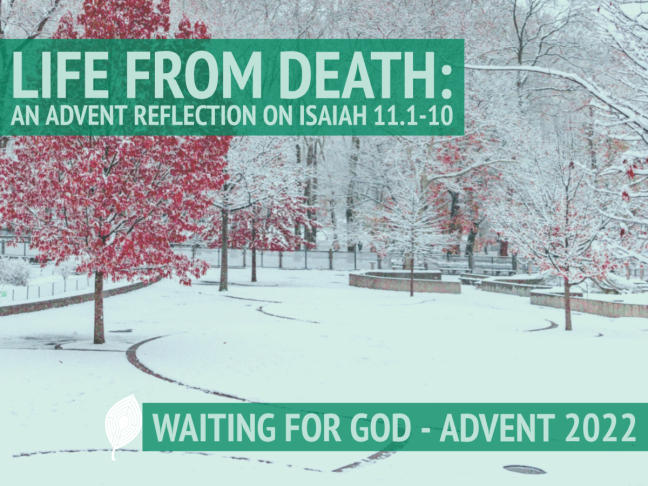 When I would go back to Vancouver Island to visit my mother, one of our favorite things to do was to go for walks through the island’s beautiful coastal mist forests. On these walks we would often find ourselves stopped in our tracks at the sight of a new sapling emerging out of an old decaying tree stump. The juxtaposition of new life and death and decay was always something that caused us to stop and bear witness.

We are of course far from the first or only people to look at such things with wonder. The shoot of new life emerging from the dead stump was, for example, an alchemical image, for the process they called mortificatio, the transformation of desire from one level of being to another. More recently, depth psychologists have identified it as an archetypal image, symbolizing the capacity for new meaning and purpose to emerge out of the interruptions of our lives. New life emerging from the remains of what has died never ceases to be a source of wonder and awe, and inspiration for what may be possible. As St. Hildegaard would remind us, the greening power of God is pervasive and persistent.

It should come as no surprise, then, that we see this image in the book of Isaiah as well: as a symbol of new life that is to come for God‘s people after the destruction they will experience in and after the crisis with Assyria. We saw this briefly in the last post, with the parenthetical statement at the end of chapter 6 that after the great tree of Judah will be cut down the stump will be the seed of new life. But the image comes into its own in today’s passage, Isaiah 11.1-10.

The text begins with the famous words: “A shoot shall come out from the stump of Jesse, and a branch shall grow out of his roots.” It’s a lovely detail that it makes reference not to David, who was always the positive symbol in Judah of the trappings of royalty, but to his father, the shepherd Jesse. It’s a clear link to the royal family, but, also puts them in their place. As Brevard Childs put it, “The naming of Jesse signals a sure continuity with Israel’s past but serves as a reminder of David’s humble beginnings of a promise grounded in divine election rather than human pride and royal presumption” (Isaiah, 102).

But this is not just a mere continuation or recovery of the royal family of Judah as it has been known. Rather, this king will be directly inspired by the Spirit of God:

This image of the ‘sevenfold Spirit’ shows the perfection of God’s presence with the messianic king. He will be empowered to govern with both knowledge and discernment in how to deploy it, in dialogue with others but also with strength, and a humble understanding of the world and his place within it. But these gifts are not about turning Judah into the next superpower, but about leading God’s people into a beautiful age that will reflect the ways of peace for which humanity was created:

He shall not judge by what his eyes see, or decide by what his ears hear;
but with righteousness he shall judge the poor,
and decide with equity for the meek of the earth;
he shall strike the earth with the rod of his mouth,
and with the breath of his lips he shall kill the wicked.
Righteousness shall be the belt around his waist,
and faithfulness the belt around his loins.

Even at the end here, where the prophet slips into military imagery, which the New Testament would later pick up to describe the empowerment of the faithful, once again, this military imagery is turned on its head, for the king girds himself not for warfare but for the battle of justice and peace against inequality and broken faith. This promise of peace extends to all creation:

The wolf shall live with the lamb, the leopard shall lie down with the kid, the calf and the lion and the fatling together, and a little child shall lead them. The cow and the bear shall graze, their young shall lie down together; and the lion shall eat straw like the ox. The nursing child shall play over the hole of the asp, and the weaned child shall put its hand on the adder’s den. They will not hurt or destroy on all my holy mountain; for the earth will be full of the knowledge of the Lord as the waters cover the sea. On that day the root of Jesse shall stand as a signal to the peoples; the nations shall inquire of him, and his dwelling shall be glorious.

Childs is correct to note how this oracle picks up on so many of the themes themes Isaiah has been working with in chapters 1-12. In this passage we see reference to not only the remnant, in this case specifically related to the remnant of the royal family, but also the image of the nations streaming to Mount Zion that we saw in chapter 2. In fact, it extends the promise of Zion to encompass not only the world’s peoples, but all created life. The salvation this Messianic figure will bring is for the asp and the adder and wolf and lamb as much as for Israel and Judah, or Assyria and Philistia.

Looking at the oracle as a whole, we see an interesting movement: It starts from a very realistic kind of hope, that the royal family will not entirely die out and will come back to reign in Jerusalem, inspired by God to rule justly — and indeed, descendants of David continued in authority over Judah both before and after the Exile. But, it quickly transcends any sort of realistic vision for any human society. The restoration of Jerusalem and its Temple was disappointing under any definition, and even more so judged against this utopian vision of Shalom presented here. And so, it’s no surprise that when in the post-Exilic period, the faithful began to constellate an image of the heroic figure we call the ‘Messiah’, this passage is one of the ones they clung to. Rather than seeing the actual restoration of Jerusalem as a disappointment, they held out hope that God’s vision for it would some day come to pass in this messianic kingdom.

As Christians, of course, we see Jesus reflected in this figure that emerges from Jesse’s roots to lead justly with the Holy Spirit’s power. And yet, we also find ourselves in a similar situation to those post-Exilic Jewish people, since so much of our own hope and expectation have not yet come to pass. It’s tempting to despair — particularly in moments such as our present one, when self-proclaimed Christians confuse justice for ‘law-and-order’ and peace for the absence of conflict, and advocate for policies that make life worse rather than better for the poor and marginalized. And yet, as I often say, hope only actually exists when there is the least cause for it. Hope is only hope when the situation feels hopeless.

So in a sense, one of the lessons for us here is, ‘the more things change, the more they stay the same.’ The Judahites in Exile, the Judeans living under the thumb of foreign oppressors after a disappointing return home, or even us Christians today — all of us know what it means to wait and watch, with hopefulness of a future that often feels unthinkable.

God has made God’s vision for creation clear: It is nothing less than the presence of whole and reciprocal, mutually-beneficial relationships among the whole created order. As Christians, we believe that God has acted decisively to offer us a new chance at this life, to die to the broken ways of this world and into the healthy, healed, and whole ways of God’s kingdom. This is a gift, but one that we must not just receive and tell everyone about, but open, put on, and live out every day. And then, as we do this, we wait, along with the faithful from every age and tongue and tribe and nation for that day when, yes, God will bring that beautiful world for which we long and and live and work into its full manifestation among us.

One thought on “Life from Death: An Advent Reflection on Isaiah 11.1-10”