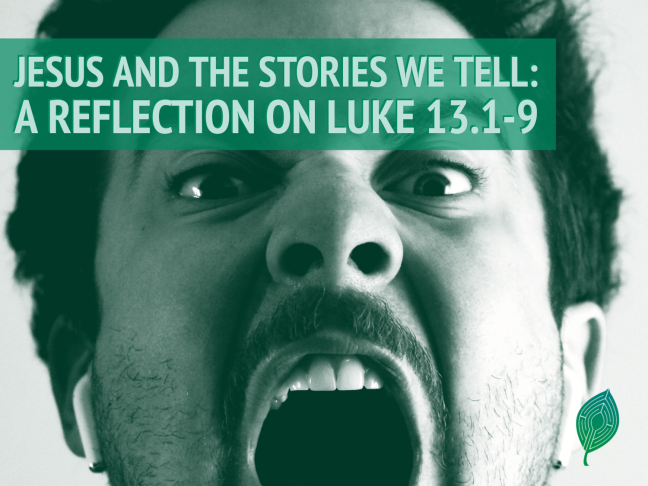 It will come as no shock to any of you to say that we are in a low moment in terms of public discourse. Everything seems to go from zero to furious in about two seconds. As discouraging as this is, it’s nothing new. There seems to be nothing more human than exaggerating the details of a story to stoke up the anger of those who hear it, or to flip a story of injustice on its head and blame the victim in order to preserve the status quo. In many ways, events themselves end up being less important than the stories we tell about them. In today’s Gospel reading, from Luke 13, Jesus finds himself in one of these situations. And how he responds to it is as instructive for us today as it was two thousand years ago.

At the start of the reading, Jesus is in a crowd that is gossiping about the latest Roman outrage. Roman soldiers had killed a group of Galileans performing a ritual sacrifice — which the gossipers have provocatively taken to describing as Pilate having “mixed their blood with their sacrifices.” This event is not described elsewhere, so it was likely not a large-scale massacre, but one of the pervasive, small incidents by which the powerful intimidate and humiliate the people they oppress. From Jesus’ response, it also seems that at least some in the crowd are focused not on stoking resentment against the Romans, but on gossiping about the victims — were they bigger sinners than other Galileans? What had they done to deserve this fate?

As we see in the worst of our public discourse today, there are two responses to injustice on display here — two different stories people are telling about the events of their day, both of which are fundamentally religious in their nature. The first response is to ask how a good God can allow such violence to happen in the world: If God cares for the Jewish people, how could God allow the Romans to oppress them? This is the age-old question of theodicy, or the ‘justice of God’, which is the most basic question the reality of life in the world poses to ethical monotheism. The second response similarly insists that God must be just, but claims that if God is just, then the acts which we see in the world must also be just (for God would not allow them to be otherwise) — and so those who suffered must have been justly punished. This is a common type of circular reasoning, which has long been used to support the status quo: If God didn’t want things to be the way they are, they wouldn’t be that way.

But, Jesus isn’t having it. Once again, he steps into the breach of blaming and shaming, of ‘us’ and ‘them’, and turns the whole thing on its head. Jesus refuses to get drawn into the outrage party, and instead focuses his attention not on the event but on the stories being told about it. Jesus’ lack of outrage at the incident should not be taken as indifference to the Roman occupation; the Romans are a given of their situation that none of them can address, so what’s of more importance to Jesus is how they live within those circumstances. Otherwise, the everyday evils of this world can end up being “a form of emotional blackmail,” as James Alison put it; responding to the news can turn into an exercise in performative outrage that doesn’t really do anyone any good.

At any rate, Jesus’ response is interesting, particularly as a religious figure: he pops the rage balloons of both stories, removing God from the equation entirely and robbing the event of any religious significance. The tragedy is neither an act against which God must act, nor is it an act of God. It is either simply a human act of human violence; or, in the second example of the falling tower, an accident. It just is. Leave God out of it.

This response seems surprising to us even today. Many people who consider themselves Christian still view the world through a lens that gives everything religious significance — a hurricane, a pandemic, a political victory or defeat. To be fair, there is a lot of biblical support for such an approach; but this is one of the ways that Jesus fulfills the Scriptures by countering them (”You have heard it said … but I say to you …”). The Bible also says, “an eye for an eye,” but Jesus rejects retributive violence. The Scriptures say not to murder or commit adultery, but Jesus pushes it further, away from actions to the intentions of the heart. While Jesus’ approach here, which refuses to give world events religious significance, is a tacit rejection of the whole perspective of the Deuteronomistic history (the books of the Old Testament that interpret Israel and Judah’s rise and fall through the lens of the blessings and curses from Deuteronomy), it is entirely consistent with Jesus’ own teaching, which consistently resists the tendency to add sacred meaning where it doesn’t belong. For example, he rejects the idea that a man was blind from birth because either he or his parents had sinned (John 9.1-3), and rejects the purity code that valued ritual observance over the disposition of the heart (Mark 7.14-23).

At the end of the day, for Jesus — and inasmuch as we follow his way, for us — it doesn’t matter why someone is attacked, or why a building collapses. What matters, and where God is to be found in those events, is in how we respond to them. We don’t stand back and analyze the details or offer our ‘enlightened’ opinions about tragedies, as though they’re sports statistics or a reality television competition. We must repent of such attitudes — of anything that creates an ‘us’ and a ‘them’, of any judgmentalism, vindictiveness, or Schadenfreude (joy in someone else’s suffering). For, whether it’s tomorrow in an accident, three years from now in an violent assault, or fifty years from now of old age, death is coming for us too. Instead of such attitudes, we are called to grieve with those who mourn, to tend to the wounded in heart and body, and to offer tangible support for the displaced and dispossessed. This is where God is in the midst of tragedy. This is the Spirit-enlivened response to the calamities around us.

(As a side note, there are both similarities and differences here to how we saw St. Augustine respond to the great tragedy of his day. He followed Jesus in undermining the religious stories being told about the sack of Rome, but didn’t go as far as Jesus did in entirely desacralizing them, still understanding the sack of Rome as a punishment or lesson sent from God.)

The reading ends with what we might interpret either as a warning or as an opportunity for change. Jesus tells a parable about a land-owner and a gardener:

A man had a fig tree planted in his vineyard; and he came looking for fruit on it and found none. So he said to the gardener, ‘See here! For three years I have come looking for fruit on this fig tree, and still I find none. Cut it down! Why should it be wasting the soil?’ He replied, ‘Sir, let it alone for one more year, until I dig around it and put manure on it. If it bears fruit next year, well and good; but if not, you can cut it down.’

We have here our old friend, the call to bear good fruit in our lives. The message is clear: it’s past time for us to tend to the soil of our lives, with God’s help, and bear the good fruit we were planted for. The kind of gossip and sensationalized fear-mongering and anger-stoking Jesus encountered in this story and which we encounter every day in our own time and place is not good fruit. Caring more about opining about the justice or injustice of an event — getting caught up in the stories being told about an event — than the people negatively impacted by it is not good fruit. We must repent of these attitudes and instead bear the good, loving fruit of God’s peace in our hearts, relationships and communities.