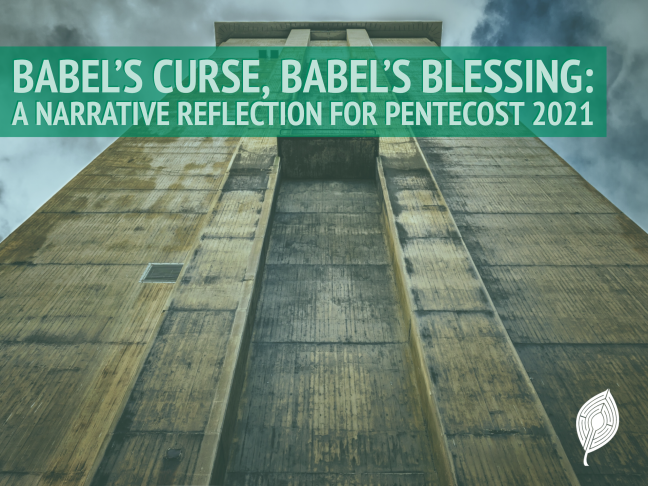 Once upon a time, the whole earth had one language, one culture, and all of the people lived in the same land.

God saw and heard all that the people said and did. God knew the thoughts of their hearts. Seeing the tower, God said, ‘I see that the people are united in one language and culture. They think there is nothing they cannot do, that because they are all the same, they are strong. This tower is just the beginning. They think they know everything, but they have only explored a small piece of the world I have made. In their ignorance and arrogance, they will remake my world in their own image.’ And so God confused their language so that no one could understand each other. God scattered them like seeds across the whole world. The tower in the city on the plain was abandoned.

The people believed that God had cursed them. But God had something else in mind.

God scattered the people like seeds, but God also prepared the lands on which those seeds would fall, so they could be planted, take root, and grow.

Over the generations, the peoples of the earth developed new languages and customs that fit the lands they had been given. They learned what foods to eat and how to live well with one another, and with the plants and animals and land and seasons of the places they called home. They gave thanks to God for all of these gifts.

Of course, all was not right in the world. People still hurt each other. People still grasped for more than was theirs. Sometimes they would forget to thank God for what they’d been given. And from time to time, one nation would rise up and try to unite the peoples together once again, under their power and make everyone just like them. But no one could undo what God had done at the tower in the city on the plain. For a world where everyone was the same was not what God wanted. Difference was not a curse like the people had thought, but was to be a blessing for the peoples and the whole world.

God was with all of the peoples of the lands, and brought life to their lands. But, God chose to walk with one nation in a special way. They would be great, but their greatness would not be like that of the tower in the city on the plain. Their greatness would not be like the Empires of the world. Through them, God would show the world that greatness is not about power but about blessing others. In the fullness of time, God came down and lived as one of them and revealed the full extent of what this greatness looks like. He taught truth, healed hearts and bodies, lifted up those who were low, and welcomed those who had been excluded from community life. He was rejected and killed, but he rose again, for his ways were the ways of life and could not be stopped by death.

But, having lived with the peoples of the earth, God did not want to leave them alone. And so, God poured out the Spirit on those who followed his ways. There was the sound of a mighty wind and the room where they were staying was filled with what looked like fire. They started to prophesy — to preach and cry and sing and shout for joy of all that God had done — not only in their own language, but in all the languages of the world. They poured out onto the streets that were packed with pilgrims, and amazed the crowds, because everyone could hear this Good News in their own language.

And so the curse of the tower in the city on the plain was undone, but in a way no one expected. In undoing the curse, God revealed the blessing: For God does not desire sameness. Sameness is not of God. What God desires is community, a unity that welcomes and transcends difference without eliminating it.