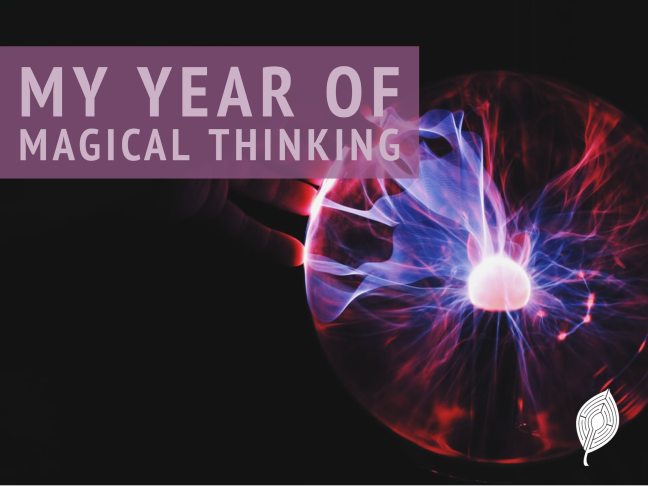 Back in January I wrote about how I was trying to re-enchant my disenchanted world. As I was reflecting on this, I couldn’t help but notice that a lot of people around me didn’t have this problem, but rather lived in a magical world. Faced with the prospect of a cold and unfeeling world, they had chosen instead to cultivate meaning and magic in their lives. For the most part they weren’t taking the paths of any of the major historical religions, but were exploring — some seriously, most ‘just for fun’ — the realms of intuitive, magical, or esoteric spiritualities.

While I have always been dismissive of these kinds of practices (let’s be honest: Christianity has never played well with them), I began to wonder. I’ve found profound and beneficial insight in other religious traditions — Why couldn’t I in these things too? Could I not engage with them with an open mind to see what might be good in them instead of seeking to find fault? Might they even help me re-enchant my disenchanted world? And so I was intentional this year about exploring as much of this stuff — astrology, tarot and oracle cards, Kabballah, intuitive imagination, and so on (the self-deprecating word practitioners of these modalities use these days is “woowoo”) — as I could, with a curious, open-minded, and charitable spirit.

Of course, not all of these things are created equal. Some, like Kabballah, are integrally connected to established religious traditions, and so I tried to approach them with the kind of respect that I would their tradition of origin as a whole. Others, while certainly having deep roots, seem to reinvent themselves in every new generation and encourage practitioners to develop their own relationships to the teachings, and so I felt more freedom to ‘play‘ with them.

It’s been a fun and surprisingly enlightening experience. For the most part, I found that the stereotypes surrounding these practices are really far off the mark (I’ll talk more about this in the next post in this series). There was, in fact, little that actually posed a challenge to my beliefs, values, and principles as a Christian. And not only did I learn a lot about — and from — these practices and sensibilities that I’d dismissed for so long, but the whole process also clarified my boundaries and provided understanding about what ‘works’ for me (It should come as no surprise to anyone who knows me that practices that were high on ritual actions did not speak to me!) and what doesn’t, and where I can suspend disbelief and where I can’t.

As the year comes to a close, I feel a lot like I did after my year of exploring different sacred practices. If we do something with intention and attention, it has the capacity to carry the sacred for us and thereby the potential for us to meet God in it. The summary I came up with in my mid-year review of my sacred practices project fits as well as anything else:

“[T]he more of life I experience, the more I see that all of creation and every moment is a burning bush, a vessel for knowledge of and communion with God, if only we have eyes to see and ears to hear.”

This exercise left me with a lot to think about and so I’ll be writing a few posts to discuss what I’ve learned from these practices and how they might inform and enrich (or not) my own practice and faith going forward. You may have noticed that the cover image for this post is branded in purple instead of the usual teal green. I’ll be doing this for all of the posts in this series as a way of differentiating them from my other posts in case some of you aren’t comfortable with the kinds of practices and ideas I’m exploring within them. But it’s been a fascinating year, and I hope most of you will come along for the ride.

*My apologies to the great Joan Didion for stealing the title of her beautiful memoir reflecting on the year following her husband’s death.

5 thoughts on “My Year of Magical Thinking*”