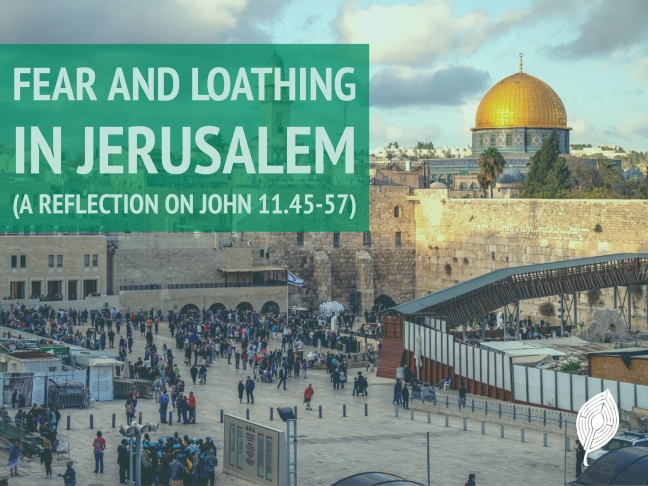 Here we are at the end of Lent. Tomorrow is Palm Sunday, the day when the Church remembers Jesus’ triumphal entry into Jerusalem where he is hailed by the masses as their champion and king. In my liturgical tradition, the same day is also called Passion Sunday, and the story of Jesus’ betrayal, arrest, trials, torture, and execution is also remembered. So it’s a day that’s filled with contradictions and irony, a day when the fickleness of human sentiment is on full display.

With that in mind, today’s Gospel reading is particularly poignant. The scene takes place on the heels of Jesus’ raising of Lazarus from the dead. Word of the event has spread into Jerusalem, just a few days before tens of thousands of faithful Jews will come into the city from around the world for Passover. The city is buzzing with news and rumours of this wonder-worker Jesus, and the religious authorities are terrified. As John tells the story:

“So the chief priests and the Pharisees called a meeting of the council, and said, “What are we to do? This man is performing many signs. If we let him go on like this, everyone will believe in him, and the Romans will come and destroy both our holy place and our nation.”

There’s a lot going on here. With authority comes responsibility, and it’s clear that their responsibilities are weighing heavily on them: they are frightened what a popular uprising around Jesus would mean for their city and nation. And, of course, their fear wasn’t wrong. In fact, just a generation after Jesus, Jerusalem and Judea did rise up against Rome around a messianic figure, and Rome did come and destroy it all. But we’d be naive to think that their motives were pure in this. Throughout the Gospels, the religious authorities are portrayed as envious of Jesus’ popularity and jealously protective of their own privilege. Their fears that a Messiah could cause trouble are not misplaced, but — as is so often the case — it’s also a cover for less admirable fears and motivations. (This isn’t just speculation: they demonstrate that the peace of the city isn’t a priority when they suggest the insurgent Barabbas be released by Rome instead of Jesus.)

The High Priest, Caiaphas, then addresses the group with a chilling suggestion: “You do not understand that it is better for you to have one man die for the people than to have the whole nation destroyed.” Get rid of Jesus, save the nation.

What we have here is a textbook example of the scapegoat mechanism at work. The scapegoat mechanism functions as an ‘all against one’ group-think. Rather than deal with their own issues and conflicts — for example, Jerusalem’s religious establishment was deeply divided — a group comes together and projects their anger and violence onto one man, or one group.  This act of violence they enact upon this ‘other’ is cathartic and eases the tension for a time, but because nothing has really been resolved, tension inevitably builds again and a new scapegoat is needed. It’s a kind of social contagion, a powerful attitude that can spread and grow within a group like an epidemic if we aren’t careful. (This is why we have to take seriously any attempt by any group to point the finger at one person or group for their problems. It almost always ends in violence, and never on the ‘right side of history’.)

The irony in the Gospel story today is that by enacting the scapegoat mechanism against Jesus, Caiaphas and the council don’t end up protecting their city and people from violent oppression, but make them complicit in it.

It’s an extraordinarily sad and shameful fact of history that the same scapegoat mechanism used here by the Jerusalem authorities against Jesus and his followers has been used so often throughout the centuries by Christians against the Jewish community. Not only is this simply evil, but it is also an explicit rejection of the message of Jesus’ death and resurrection. For by raising Jesus, the scapegoat, from the dead, God has vindicated him and demonstrated once and for all that the scapegoat mechanism is a lie: an evil committed against one person or group is an evil pure and simple; again, making the community complicit in evil rather than protecting against it.

The fact that the scapegoat mechanism remains such a powerful force, even for followers of a faith whose founding story is a rejection of its logic, shows just how deeply rooted fear of the other is in us as a species. It’s important to be mindful of it so we can recognize it in the world when it’s happening, whether in our families, workplaces, or countries.

While Jesus’ resurrection was the ultimate rebuke of the scapegoat mechanism, his whole life and teaching rejected its fear-based underpinnings. He taught that it is the meek, the humble, those who mourn who are blessed; he proclaimed that neither sin nor holiness is just about outward acts but rather about the disposition of heart underlying them; he commanded those who follow him not to strike back when attacked but to turn the other cheek, and if pressed to walk one mile to walk two instead. When tempted in the wilderness, he refused to demand what was rightfully his and refused to do the right thing the wrong way, and, during his arrest, he healed the man whom Peter had attacked; and from his cross, he forgave those who crucified him.

For Jesus — for the God Jesus reveals — one wrong cannot be made right by another wrong. One unjust act cannot create justice out of injustice.

I’m glad to have this reminder as we are about to walk with Jesus through his journey to the cross this week.