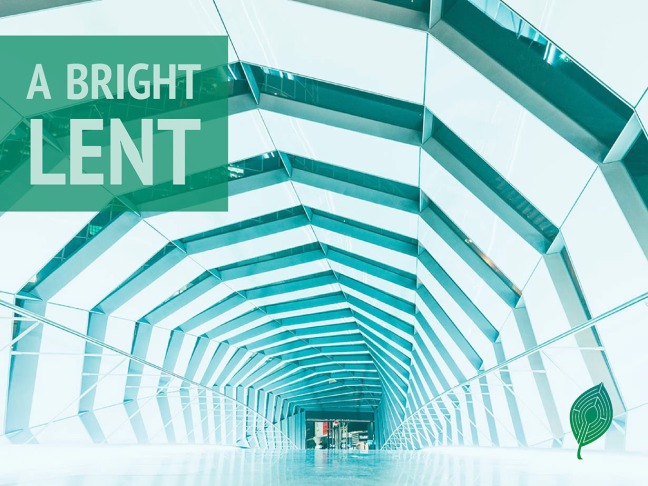 [Originally posted two years ago on my old blog]

Those of you who know me undoubtedly know my deeply ambivalent feelings about Lent, or more accurately, about how Lent tends to be celebrated. Too often this season of penitence is defined by external things, like the lack of flowers on the altar, or depriving oneself of one favorite food or another. Or, what has always been for me the greatest of sins against Lent, is the Western tradition’s insistence on eliminating the ancient and venerable word of of praise “Hallelujah” from its vocabulary during this season, as though somehow remembering our need for repentance ought to make us forget how the story ends. (This is, as it happens, purely a Western neurosis; in the Eastern Church, if anything, Hallelujah is said more often during Lent.)

My issue is not with these acts in themselves: simplicity is a wonderful virtue, fasting is an incredibly valuable discipline (more on that below), and taking time out to be more intentional about repentance is always a good thing (forbidden ten-letter words notwithstanding). The difficulty I have with conventional Lenten practice is that these well-intentioned things come together to turn Lent into a rather dark and dreary time — not only a long, dark tunnel, but one in which we are meant to stumble around with our eyes closed lest we should see the bright light waiting for us at its end.

The analogy of the light at the end of the tunnel is as fitting a place to begin as any because, of course, Lent began as a time of preparation for catechumens awaiting baptism at Easter, celebrations filled with the imagery of brightness, fire, and light. And, just as the catechumens would look forward with anticipation to their baptism, so too should we always keep the Light and joy of the Resurrection before the eyes of our hearts during Lent. Yet, it’s not only by looking forward that we can bring Light into our Lenten journey. In fact, far from being a dark and dreary season at all, I believe Lent — if properly understood — is just as light and bright as any time in the year.

Ever since Christmas, we have been celebrating the season of Epiphany (Christmas was, in fact, originally part of the Epiphany celebration), the season when the Church celebrates the various ways the Light of God shines into the world in the person of Jesus, who is the Sun of Righteousness, the Light to enlighten the Gentiles, the Light of the World, and the one who was transfigured with the Divine Light on the Mountain. It is an incredibly joyous season in the life of the Church. 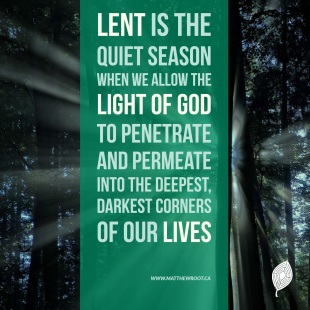 Yet this Light doesn’t go anywhere when Epiphany ends. Lent isn’t the undoing of Epiphany — the Light that has shone into the darkness is still shining as brightly as ever. Lent is rather the fulfillment of Epiphany, its application in our own lives. Lent is the quiet season when we step back and allow that very same Light in which we’ve been basking since Christmas to penetrate and permeate into the deepest, darkest corners of our lives, when we proclaim to our own hearts, “Arise! Shine! Your Light has come!” and exhort ourselves to “live as children of the light” so that we might become “the light of the world,” a city on a hill for all to see.

This is, I believe, the heart of repentance, a word that is unjustly difficult to talk about in our culture. There is certainly a side of repentance that is, in the words of Michael Ramsey, about “saying sorry and turning.” But this isn’t necessarily about guilt (though there are often times when it can be and should be, since we all actively wrong each other from time to time), and is certainly not about shame. In our culture, I would even argue that the primary ‘sin’ we experience has nothing to do with doing bad things but is rather about allowing ourselves to be distracted and aimless, like lost sheep. At its centre, repentance is not about guilt or shame but about a reorientation of the heart away from the self and towards God. Preachers often talk about the Greek word for repentance, metanoia, as meaning “a change (the ‘meta’ part of the word) of mind (the ‘noia’ part, coming from the Greek word nous).” But we English speakers can get badly off track with this interpretation, because nous isn’t “mind” in the way that we understand the term. Whereas in English, the mind is the organ of cognition, thinking, and planning, in Greek, the nous is rather an organ of perception; it’s the “eye of the heart.” So if we’re going to play the etymology game (a dangerous game, but one that I do think is instructive here), it’s less a change of mind we’re talking about than it is a change of heart and perception. Repentance is a fundamental reorientation and changing of how we see and understand ourselves and circumstances. In the jargon of positive psychology we might even say that to repent is to reframe our circumstances, and specifically in the Christian context, to reframe them in light of — or rather in the Light of — the Gospel.

Of course, when we allow the Light of God to shine into the dark and shadowy places of our hearts, we won’t always like what we see. It’s easier to be in the dark, even if that darkness is harming us and our relationships, because seeing reality — becoming aware — demands responsibility on our parts. Illusion, delusion and ignorance are always tempting, because dealing with reality is hard work and demands us to change and sacrifice. Not only do we often prefer the illusions of our fantasies to reality, but often — particularly in our culture which demands perfection while constantly moving the bar of what that ‘perfection’ looks like — we often project false versions of ourselves to others because deep down we believe that who we truly are doesn’t measure up, and is therefore unworthy. Yet, the bubble will always pop eventually.

Even if remaining in the dark is easier, we know that doing what comes easiest is never doing what is best. This is because always taking the easy path is a rejection of our freedom. This is a truth that our spiritual forebears understood far better than our own culture does. They rightly understood that acting on whatever passing fancy of the ego or id may come along — what they helpfully called the passions, those things that rob us of our agency and freedom — is not freedom, but enslavement. To be truly free to drink the beer or eat the cheeseburger or have sex, we must also be free not to drink the beer, not to eat the cheeseburger, not to have sex. (Otherwise we’re just addicts, even if what we’re addicted to is self-gratification rather than the substances themselves.) This idea isn’t some obscurantist, self-loathing mediaeval idea; in fact, it’s becoming increasingly common in the field of positive psychology, a discipline all about helping people grow and reach their goals and full potential. In positive psychology, it’s simply called being “in choice.” It’s no good to justify ourselves by saying, “I guess I just have a slutty side,” or “I’m just a glutton,” because it deflects our responsibility — our freedom — over our behaviours and attitudes. While deflecting responsibility may have a compassionate motivation, it misses the mark, because it diminishes us and our freedom, while also making the areas where we may struggle into indelible parts of who we are, obscuring the fact that we were created for goodness and beauty in the image and likeness of God. The genuine compassionate response is not to say “I’m just a glutton” but “I’m not as free as I’d like to be, yet.” 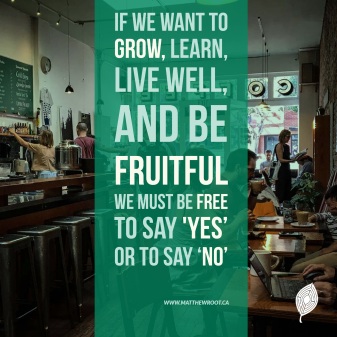 This is why fasting is such an important part of every spiritual tradition. If we want to grow, learn, live well, and be fruitful — if we want to be healthy — we must be free to say ‘yes’ or to say ‘no’, we must be “in choice.” It isn’t a matter of always saying no to our desires; it’s about cultivating the ability to say no and the wisdom and the discernment to know when we should say no (and, just as importantly, when we should say yes — a rigid and ungracious life of deprivation is just as much an enslavement to the passions as a life of unrestrained consumption). And, bringing this discussion back to the topic at hand, the only way to learn this wisdom and discernment is to hold our desires up, expose them, reveal them, to the Light of God. It is challenging, but beautiful and bright. And that is, at heart, what Lent is about.

May we all live as children of the Light as we enter this challenging, beautiful and bright, Lenten season.

Arise, O my Soul! Shine! Your Light has come!
The glory of the LORD has risen upon you!

41 thoughts on “A Bright Lent”