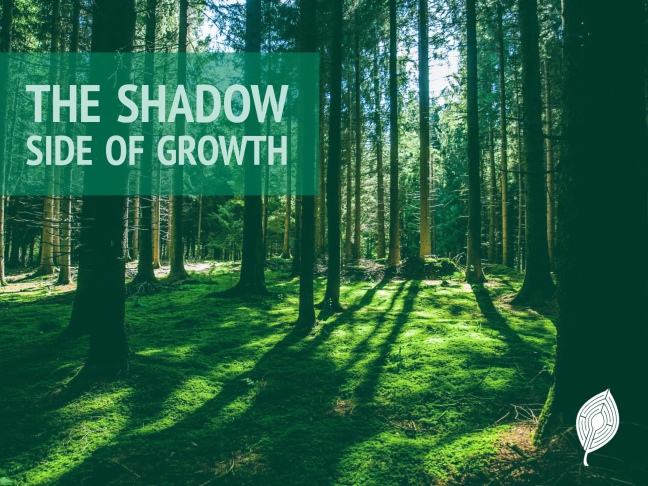 I love the metaphor of growth for discussing the spiritual life. From Psalm 1’s stunning image of the faithful person being “like a tree planted by streams of water,” whose leaf will not wither, and who will prosper, bearing forth fruit in its season; to the prophetic image of Israel as a vineyard; to John the Baptist’s call to bear good fruit worthy of repentance; to Jesus’ beautiful imagery of the vine and the branches or the farmer scattering seed; to Paul’s call for us to grow up in faith toward maturity, the metaphor of growth pervades the Scriptures. Unsurprisingly, it is also a common idea in the world of positive psychology, which emphasizes the importance of living in at atmosphere of growth — of living life asking questions about what we can learn from our circumstances, how we can improve our habits, and how we can live our best lives. There is something universally beautiful, true, and good about the image of fresh shoots of green, especially those shocking, bright blushes of new growth at the end of a long winter.

And so, I love the metaphor of growth.

And yet, this week I encountered two profound comments that speak convincingly of growth in a negative way. This reminded me not only of the limitations of any metaphor, but also of one the most important, deep and profound truths I’ve ever learned: The opposite of a deep truth is not a falsehood, but an equally important truth. Thus, we have to be prepared to unsay whatever it is we say, especially when we’re talking about God or the great mysteries of life and faith. And so today I want to reflect on these two ideas, not to undermine the metaphor of growth, but to help us better understand it and ensure we aren’t thinking of it in an unhealthy or idolatrous way.

The first piece is an essay by the popular Buddhist teacher Pema Chödrön, published on Tricycle as “Nothing to (Im)prove.” She begins: “When we start to meditate or to work with any kind of spiritual discipline, we often think that somehow we’re going to improve, which is a subtle aggression against who we really are.” She continues, “But lovingkindness … toward ourselves doesn’t mean getting rid of anything. [It] means that we can still be crazy, we can still be angry. We can still be timid or jealous or full of feelings of unworthiness. Meditation practice isn’t about trying to throw ourselves away and become something better. It’s about befriending who we are already. The ground of practice is you or me or whoever we are right now, just as we are. That’s what we come to know with tremendous curiosity and interest.” As I’ve written before, the idea of self-love is controversial in some Christian circles. But, regardless of how might choose to express it, Pema Chödrön is speaking truth here.

It reminds me of a common Eastern Orthodox Christian saying: Yes, God became human so that humans might become God, but God also became human so that humans might become human. As much as we might rightly speak of a desire to be transformed in sacred practice and the spiritual life, the goal is not to become something different, but to become more fully ourselves. An acorn doesn’t grow into an apple tree, nor does it need to and nor should it want to. Its job isn’t to be an apple tree; its job is to grow into an oak. Its growth doesn’t fundamentally change it from what it was; it releases what was always within it. The same is true with us. 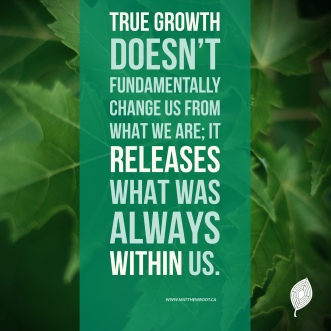 Also, even if there are attitudes or behaviours we need to change in order to grow into maturity, that doesn’t diminish our fundamental worthiness as we are now. In the Christian tradition, we are said to be created “in the image and likeness of God.” In professional coaching circles, it’s called “the principle of okayness.” Nothing we can do or become can make us any more worthy of love, respect, dignity, and justice than we are right now. Our dignity is hardwired.

This is a truth that can save true teaching on human growth from becoming a graceless cult of growth that overvalues achievement and ‘success’ (thought of in human terms), which inadvertently marginalizes those who can’t for whatever reason reach the same, obvious heights. I’m reminded in this of my childhood in Yukon Territory in the Canadian North. Not only is it cold there with a short growing season, but this part of the North also receives little in the way of precipitation. In such an environment, a hundred year-old tree might have a trunk only as wide as a clenched fist. These trees may not be as impressive as their majestic, towering cousins that grow just a couple hours down the road in the rainforests of southeast Alaska, but they are no less a witness to the power and potential of life to thrive and grow. In their own way they are joyous miracles of life, overcoming the odds to be what they are. This could be read condescendingly — “Aw, they try their best, bless their hearts” — but that’s not how I see it. To live in that environment is not primarily about effort, but about adaptation and resilience. Some of the majestic coastal trees we hold up as exemplars of growth might not survive a year in the climate in which the humbler trees of the northern interior live and grow. The point here is twofold: first, growth doesn’t always look like we think it will and therefore it’s not for us to judge; and second, whatever growth we can manage, no matter how modest from outside eyes, glorifies God. (And, Jesus’ teaching always preferred the humble to the mighty anyway.)

To take this critique of growth in a different direction, it’s also important to remember that each stage of development is good and beautiful in its own way. We don’t despise a baby for its lack of motor skills — in fact it’s part of what makes babies so endearing. Nor do we sneer at children for acting childish. In my experience, the children with whom we resonate most strongly are the ones who are most deeply engaged and at peace with exactly where they are at: from the wonder and curiosity of early childhood, through to the exploration and self-discovery of late adolescence.

Similarly, no matter how growth-oriented and open to change and discovery we may want to be as adults, that doesn’t make us less for being where we are at now. Desiring to grow doesn’t mean throwing away who we are now; it means building on the good beginning (and middle) we have made, and God has made in us.

The second piece about growth I wanted to highlight comes from the first chapter of Terry Patten’s A New Republic of the Heart (2018). He writes: “Human civilization is addicted to growth, and that growth has been steadily accelerating” (18). He later adds, “A growth economy based on constant material expansion eventually becomes incompatible with the health of a finite planet. To radically re-engineer the system, we will have to simultaneously re-engineer ourselves” (21). Obviously he’s talking about growth in economic and ecological spheres here, but I think there’s still an important lesson for those of us concerned with the development and growth of the human person and spirit. Growth for growth’s sake is not only unsustainable and unrealistic, but is dangerous and unhealthy. We can’t undertake a culture of more. Growth for growth’s sake is cancer.

In contrast, healthy growth is growth for the sake of the other. This is where the analogy of bearing good fruit becomes helpful. In order to bear good fruit, a tree certainly needs to grow, but that growth isn’t the point: the point is to produce fruit. And ultimately, the fruit of an apple tree isn’t an apple, but another apple tree. We grow and we live out that growth in order to raise up others into their own growth and maturity. Certainly the most obvious way this plays out in our lives is raising up the next generation, but if we think of how deeply interconnected we are to all of the created world, and if we take seriously the Scriptures’ claims that salvation has a cosmic scope, this loving care and concern will extend beyond our families and immediate communities, and beyond even the whole human family, but to the entire cosmos.

And so, those of us who love to speak about growth do well to keep these things in mind. Our faith may speak highly of growth as a goal of human life, and rightly so, but we need to keep in mind some important points to keep this value of growth from becoming an unhealthy attachment:

“That we should no longer be children, tossed to and fro … but, speaking the truth in love, may grow up in all things into Him who is the head—Christ” (Eph 4.14f).

9 thoughts on “The Shadow Side of Growth”