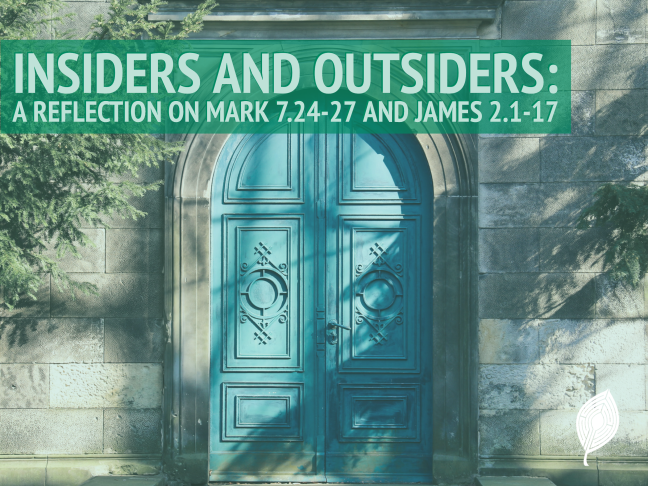 A recurring theme in the Sunday lessons this Summer has been the question of insiders and outsiders. We saw this playing out in the Acts of the Apostles of few weeks ago, when Peter received a lesson from the Holy Spirit that the rules of engagement had changed and that the old ritual markers of faithfulness were no longer going to determine who was ‘in’ with God. Last week’s readings similarly challenged the Law as the judge of who is in and who is out; I reflected on the Gospel reading, in which Jesus turned the idea of being ‘defiled’ on its head, but the Epistle reading from James struck a similar chord, insisting that our faith has to be lived out in real-life relationships and not just a matter of private observance. Today’s readings continue this theme of insiders and outsiders in the new community Jesus creates.

First let’s look at the Gospel reading, which follows directly from last week’s story. It’s important at the outset that Jesus, upon leaving the Pharisees and their hypocritical legal gate-keeping, goes directly into predominantly Gentile territory. Unsurprisingly, there he encounters a Gentile woman, of Syrophoenician (i.e., local) origin. The contrast between the Pharisees’ reaction to Jesus — questioning whether he really belongs because he doesn’t toe the line of their religious observance — and the woman’s — insisting on being welcomed into what she saw God was doing through Jesus — could not be greater. She quickly breaks down Jesus’ limp protestations about Jewish priority and he heals her daughter because of her faith. From there, Jesus goes to the Decapolis, a collection of cities founded by Greek colonists when the region was under Seleucid and Ptolemaic rule. The text doesn’t say the people he met there were Gentiles, but it stands to reason that they probably were, since Mark goes out of his way to highlight that this is a journey into predominantly Gentile territory. (I can’t help but think of this in terms of my own city’s geography; if the people Jesus meets here are Jewish, then what Mark does would be something akin to saying someone in Toronto went to Little Jamaica by way of Koreatown and the Corso Italia just to talk to some Anglos; it could be the case but it would be a very odd way of introducing it!) At any rate, here once again, Jesus heals, this time without questioning them about their national or cultural background.

So in this story, Jesus has doubled-down on his insistence that it is what comes out of us — our words, beliefs, and actions — that determines our faithfulness, not what we eat or how we wash our hands or who we hang out with or what our ancestry may be.

The Epistle similarly tackles the question of belonging, but instead of focusing on race and cultural markers, James focuses on another perennial dividing marker in communities: wealth. There was apparently a problem in his community with the wealthy getting priority over the poor. To this James writes a scathing, multi-pronged rebuke: First, there simply aren’t supposed to be distinctions within the community of faith, so showing favoritism to the rich demonstrates that all is not right with how they’re thinking. Second, he points out that the poor often have stronger faith than the wealthy, so if anything they should have the higher honours. Third, it’s the rich who are oppressing them all in the first place, so why are they tripping over themselves to show them favoritism? And fourth, the Law itself can be summarized as “loving your neighbour has yourself,” so showing partiality is Law-breaking. (James addresses his letter specifically to Jewish communities living outside of Judea, so he’s writing to people with a stronger attachment to the Law than to those Paul generally wrote to.) Under absolutely no circumstances, then, should there be any favoritism in the Church, and especially not to those who are already ‘first’ in the world. As Jesus said, it is hard for a rich man to enter the kingdom of heaven, a kingdom in which the first shall be last and the last shall be first.

The point of all this today is the same as it was two thousand years ago. Belonging in the ‘new’ community Christ creates is not about external things like race or culture or interpretation of the law or social status or money. It is a new society full stop. The old rules do not apply. This has proven hard for Christians. We still tend to clump together with believers who look and sound just like us; the wealthy are still often made to feel more comfortable in churches than those struggling to get by. Today’s readings are a reminder to do and be better, to live into the revolutionary ‘newness’ the Church is called to express.