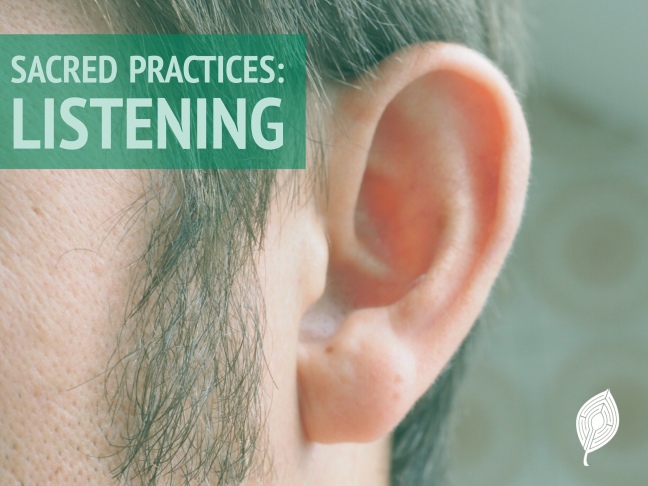 Listening is the most basic aspect of communication. It’s ironic that as infants we need to learn how to speak yet can hear automatically; yet as adults so many of us talk automatically and need to learn how to hear. One estimate I found this week suggested that only about one in ten people in North America is an effective listener. Another estimate suggests that we only take in about 50% of the words spoken to us and only actually process 50% of those. And things seem to be getting worse. Not only do we have to deal with the historical distractions of what’s going on around us and within our own minds, but now most of us also have the distraction of having a powerful computer in our pockets or even in our hands to tempt us as we try to listen. (For me this is particularly bad when I’m talking on the phone because I’m trying to focus on what someone is saying while I’m holding in my hand the greatest distraction machine ever invented!)

While internal and external distractions are the biggest barriers to effective listening, it can manifest in other ways too, including non-responsive listening — when someone is speaking to us and we don’t acknowledge what they’re saying; ‘goaltending’ — this a combative conversation style that doesn’t move forward towards understanding; and conversation theft — when the listener hijacks the conversation and makes it about them. (If you’re interested in thinking about how well you listen, this self-assessment quiz from Psychology Today is a helpful place to begin.)

So, listening can go wrong in many ways. But it is so important. Listening well helps our focus, facilitates understanding, promotes trust, reduces conflict, and helps us to motivate and inspire others. As Henri Nouwen once put it, “The beauty of listening is that, those who are listened to start feeling accepted, start taking their words more seriously and discovering their own true selves. Listening is a form of spiritual hospitality by which you invite strangers to become friends” (“Listening as Spiritual Hospitality”).

Or, as the proverb says simply: “Listening is loving.” 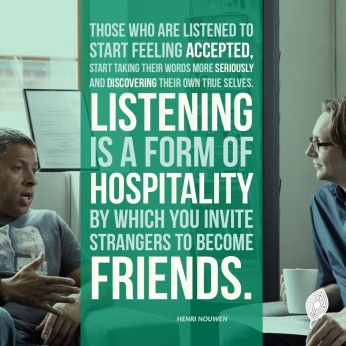 True listening can be described by words such as “hungry,” “porous,” “hunting and gathering,” “curious,” “clarifying,” and “open.” All of these describe an activity that is simultaneously active and receptive, or better, actively receptive. Good listening is actively interested in and curious about what the speaker has to say, for its own sake and not as something to be opposed or ignored. In the famous words of the beautiful (if falsely attributed) “Prayer of St Francis,” true listening “seeks not so much … to be understood as to understand.” It is the way of relationship and the way of true, spiritual peace.

There are many elements of listening that one could focus on depending on one’s particular pain points. These could include: cultivating openmindedness, relaxing, hearing the words, paying attention to nonverbal cues, asking open-ended questions, making soft eye contact, responding with nods or affirming vocalizations, not interrupting, asking for clarification, and paraphrasing what you hear.

This week I focused primarily on making sure I was actually hearing the words and phrases people were saying, while also trying to keep these other elements in mind.

When I started this practice, it felt like a lot was riding on it. More than most practices, this one had the capacity to change all of my interactions with people — family, friends, colleagues, right down to the people I pass on the street. Unfortunately, I got sick a few days in and so my opportunities to really experiment with this practice were limited. So, I decided to extend the practice for a second week in an attempt to do it justice. While old established patterns of interacting with others are really difficult to break, I found I was able to remind myself of my intentions in the moment and improve my listening as a result.

Listening is a multifaceted activity; that is probably what makes it such a challenge for so many of us. For me these past two weeks, some of these tasks were easier than others. One of the aspect of listening that I found easier were clarifying and preventing misunderstandings. I have one friend, for example, with whom I often have frustrating conversations; many of these are made frustrating because we have equally strong but opposite tendencies in how we use words. And so, knowing this about how we relate and with this week’s practice in mind, I was able to stop and ask for clarification about how he was using a word in the moment rather than reacting to what the word meant to me. While it didn’t really help us come to agreement in the end, it did help me to better understand what he was saying: If we were going to disagree, at least we were disagreeing about the same thing.

More challenging for me was actually hearing what people were saying. I have a very busy and fast mind that’s always looking for connections and ways to synthesize new information. While on the whole this is a strength, as usual, a weakness is a strength overplayed; and the weakness that is the shadow of this particular trait is that it can sometimes be hard for me to stay with the person who is speaking. It’s not that I think that what I’m thinking is more important or of greater value, but that my mind is always racing ahead to what’s next. That isn’t a justification at all, because regardless of the motivation, it amounts to much the same in the end. Either way, the relationship loses out in the end because I’m missing so much of what is said. I’ve expressed this in a pretty extreme way — it’s not that I don’t listen to people and it’s definitely something I’ve improved over the years, but it’s still a legitimate growing edge. And this practice did release this a bit more for me; I think what shifted was that rather than viewing ‘what I’m doing now’ as the back-and-forth of conversation, the practice enabled me to view listening, full stop, as ‘what I’m doing now.’ The other half of the conversation piece was a different task, for later. And it did help.

What both of these elements of listening remind me is that listening well is a way of cultivating humility. Taking the time and energy to clarify recognizes that words and our interpretations of them are slippery and we’d do well not to take them too seriously. Similarly, taking the time and energy to focus on what someone else is saying de-centres our own ego for those precious moments and opens us up to the possibility that our ideas are wrong or too small. And so, listening is a critical skill for cultivating the virtue of humility — especially for those of us whose social and political privilege has not socialized us to question our thoughts and beliefs.

But this doesn’t tell the whole story. This is where the beautiful words of Henri Nouwen that I mentioned earlier come into play: They express something important for understanding the true sacredness of listening. There is nothing quite as heartening and healing as feeling that we’ve been heard, truly and deeply understood. And there are few things more isolating than feeling misunderstood or ignored. This means that listening is one of the greatest gifts we can offer. And so, for someone like me, for whom communion is one of the primary themes of the spiritual life, this means that not only must listening be a top priority, but also that it must be handled with care, as something holy. The words of a friend or stranger are sacred.

While none of this was new to me exactly, this practice reminded me of just how important intentional listening is and it has spurred me to heighten my awareness of it going forward.