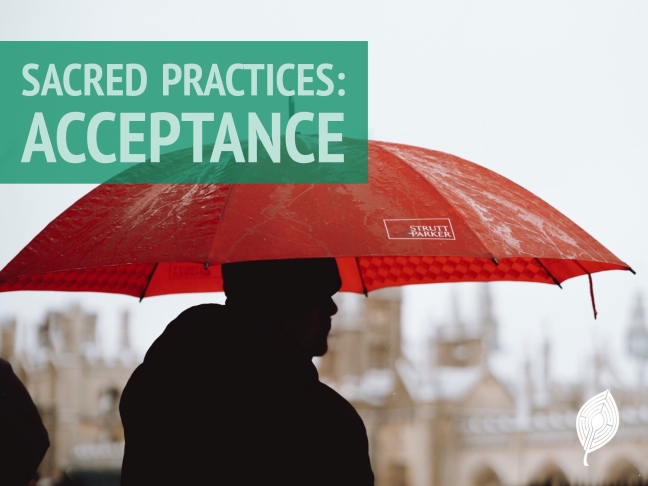 I had planned on taking a week off from these explorations of sacred practices during my vacation, but my time away ended up providing me ample reminder of one of the most vital practices of all: accepting things as they are.

Accepting things to be as they are hasn’t been a huge theme in Christianity historically speaking, particularly as compared to other religious traditions such as Buddhism. But it is certainly not absent. For example, God’s response to Job is a lesson in acceptance of his finitude:  “Where were you when I laid the foundations of the earth? Tell Me, if you have understanding. Who determined its measurements?” (Job 38.4-5). Throughout the Scriptures, the faithful are consistently reminded of their place: they are not God; only God is God. While narratively, it’s a matter of authority and trust, practically speaking, it is an important step in accepting reality: If I recognize my limitations and that there is much that is outside of my control, I am a significant way toward accepting things as they are.

Acceptance of things as they are is also a theme of Reinhold Niebuhr’s famous ‘Serenity Prayer’. Here it has the helpful insight that acceptance doesn’t necessarily mean passivity. It is, “to accept the things I cannot change, … to change the things I can, and wisdom to know the difference.”

This practice is really about awareness, paying attention to my emotions and bodily reactions to what’s happening around me. If I’m feeling stressed, then I need to accept the situation as being stressful. If there is uncertainty, I need to accept it as uncertain. And so on. It is to stop rebelling against or denying what is happening.

Again, it doesn’t necessarily mean remaining passive in the face of it; it’s simply to name the problem for what it is and accept that it is what it is, regardless of what might come next.

My vacation provided me with ample opportunities to flex this particular spiritual muscle, from changes in weather forecasts, to dealing with the whims, habits, and predilections of family, to managing the uncertainty of air travel,  to simply being out of routine.

As I said in my introduction, this was was not a planned practice, but one borne out of the realities of my vacation plans. But I’m glad the idea to treat it as an intentional sacred practice came to me, because I think it allowed me to navigate the ups and downs of my time away with less anxiety than I would have otherwise.

One of the things I like about acceptance as a sacred practice is that it is really about saying ‘yes:’ saying yes to life just as it presents itself. It’s about saying ‘yes’ to the rainy day, ‘yes’ to the glitchy plans, ‘yes’ to the realities of entering other people’s lives for a day or two. Once I say ‘yes’ to reality, then I can deal with it. It seems obvious, but it’s true. The moment I stop internally rebelling against things outside of my control, I immediately feel my body start to relax and my anxiety levels go down. Then I’m in a place where I can start to deal with reality as I need to, whether that’s a more passive approach that makes the best out of a less desirable situation, or a more active one that tries to change it.

At the end of the day, denial doesn’t do us any good. It’s far better to face problems or even just things that don’t measure up to how we’d prefer them to be than to strain and struggle against reality. To use a nerdier, grammatical, metaphor, acceptance is like living life in the indicative mood. Rather than being caught in the world of ‘oughts’, ‘shoulds,’ ‘ifs,’ and ‘coulds’ (“That shouldn’t have happened to me;” “He ought not to have done that;” “If only…”), it simply accepts the reality of what is and how things are. For me, this metaphor is helpful because it moves me towards forgiveness. When I struggle to forgive, it’s almost always because I’m focusing more on what I think should have happened, or on what someone could have done instead, rather than on what actually happened or on where things are at now. Once I let go of my of my attachment to my preferences, I can far more easily succeed in what Richard Rohr called “the struggle to forgive reality for being exact what it is right now.”

What all these themes seem to be circling around is humility, and the more I reflect on acceptance, the more apt this seems. Practicing acceptance is practicing humility: saying ‘yes’ to reality is saying ‘no’ to my own ideas and preferences, or at least to a narcissistic or even solipsistic engagement with them. And so in this way, not only is acceptance a helpful sacred practice, but it could even be the most helpful of all.