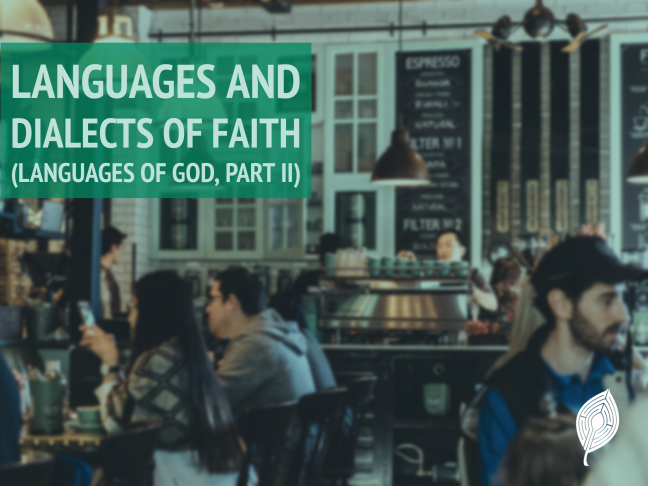 [This post is part of a series that looks at religion and faith using concepts and tools gained from linguistics. Part I of the series is available here.]

No two people share the same way of talking. Even within the same family, our pronunciations vary a little, we have different vocabularies, and prefer certain sentence structures and turns of phrase. Despite unique speech patterns, or grammars, there are millions of people around the world we can understand and who can understand us. But among these millions, some are easier to understand than others; we notice differences based on where people are from, and more subtly, differences of gender, education and class.

Our religious beliefs and practices work much the same way. Each of us has our own unique take on life’s big questions — what God is like (if God exists at all), how we should treat one another, what rituals are meaningful for us, and so on. But that doesn’t mean we exist in our own individual spiritual bubbles. These sets of beliefs and practices group together in ways that allow for mutual understanding and recognition, that allow for a shared experience and understanding of what is of ultimate value in community. We call these groups ‘religions’. Working with our linguistic analogy, religions function  like languages. They form the most diverse group which still allows for mutual understanding without translation.

But we can’t understand everyone equally well; some people talk just like us, and some “speak with an accent.” Within a language, there are dialects, different ways of speaking that are legitimately different, but not so different as to confound mutual understanding. These developed historically because, for the most part, people didn’t hear or talk to people outside their village or region. In time, unique regional patterns crept in creating regional or class-based dialects. Similarly, within religions, over time differences emerge in faith and practice, which become its dialects: its doctrinal divisions, denominations, or lineages. So, just as an Australian may sound strange to my ears, but I have no doubt she’s speaking English, a Calvinist’s beliefs may sit uncomfortably in my head and heart, but I have no doubt he is ‘speaking’ Christian.

These dialects of faith tell the history of a religion and the conversations that have occurred within it. The split between Eastern and Western Christianity occurred mostly because, for a variety of historical and linguistic reasons, the two halves of the old Roman Empire started having different conversations. To grossly oversimplify, the conversation in the East revolved around how we know God, whereas the conversation in the West was about how we are saved from damnation. When specific differences in belief and practice came up, the two halves of Christendom ended up like my friend and her Scottish customer (see the first post in this series for the story): trying to speak about technical things in their own very different dialects and struggling to bridge the divide. Later, when centrifugal forces within the West began to disrupt its unity, the West’s fundamental conversation remained the same, with the Roman Catholic and various Protestant dialects offering up different answers to the question of what the grace that saves us looks like.

Different conversations lead us down different rabbit holes, and so we end up in our own warrens, as earlier choices in the conversation form the presuppositions of later stages. In this way, we become further and further removed from folk in other warrens, to the extent that it’s hard even to conceive of having made a different choice earlier in the conversation.

As these conversations crystallized, the different dialects of faith did too. Each developed their own prescriptive grammars, with formal Confessions or statements of faith outlining exactly what it meant to be a member.

But, a funny thing happened on the way to the Forum. And, in recent decades we’ve seen these old lines — these old dialects of the Christian faith which used to be so set in their ways — start to crumble. Some of this was accidental, with urbanization and immigration contributing to what we might call spiritual dialect mixing. But a lot of it was also intentional, with last century’s formal ecumenical movement and the greater availability of ancient Christian texts spurring more and more Christians towards common ground. To use our rabbit warren analogy, the desire to speak with each other has caused many Christians to turn around start walking back up through their tunnels to find where their paths meet those of other Christians.

But it’s not just a matter of old divisions falling away. New divisions are emerging. And there’s another part of linguistic analysis that I think helps to explain that. So stay tuned till next time for that.

I’d like to leave you with one further thought about this. Sometimes, we decide if we understand someone or not. The question is how much we value the common ground.

Returning to the example of the schism between East and West, from our vantage point today, it’s hard to see how it was they felt they couldn’t understand each other anymore. There were certainly important differences between these two great dialects of the Christian faith, but nothing that couldn’t be overcome with goodwill. The fact is, they chose to see themselves as speaking different languages of faith rather than dialects of a shared language. This is actually a surprisingly common phenomenon in language. From a linguistic perspective, Serbian and Croatian are the same language, as are Urdu and Hindi. But, for completely unrelated reasons — cultural, religious, political and orthographic — speakers of these languages prefer to think of themselves as speaking different languages. Sometimes understanding each other is a matter of what we choose to prioritize.

And this is the point I’d like to leave with you today: When engaging with people from other doctrinal traditions within your religion, do you focus on what you have in common or on how you differ? How do you make the determination of whether you ‘speak’ the same faith? What values drive that?

6 thoughts on “Languages and Dialects of Faith”