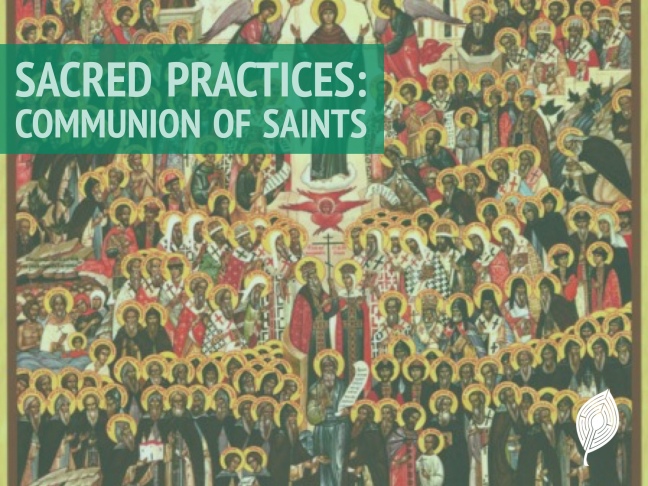 After last week’s focus on the coming and work of the Holy Spirit, my thoughts this week naturally went to the people whose lives radiated with the Spirit’s energy, gifts, and fruit. This is a natural progression and, historically — in the East to this day and in the West until about the 8th century (when it was moved to November 1 for practical reasons pertaining to the availability of food for pilgrims) — All Saints Day was celebrated the Sunday after Pentecost for just this reason. It’s impossible to think of the work of the Spirit without thinking of how that work has manifested itself in actual human lives. And so in honour of that, my practice this week was cultivating the communion of saints.

People who convert to Christianity or who were raised in expressions of Christianity that arose in the Modern period are often confused by the veneration of the saints, a practice found in older Christian traditions. While much could be said about Christian history and the origins and development of veneration of martyrs and, later, other men and women of faith, the simplest explanation is simply that, from the earliest times, Christians have found that the holy people in their communities never really left them when they died. That, by the grace of God, these holy ones — saints — continued to intercede for them and minister to them after their death, just as they had in their earthly life.

Even in our Scriptures there is a sense that the dead in God are not far from us. Most famously, Hebrews 11 contains a lengthy list of heroes of the faith, “the great cloud of witnesses.” There is an urgency and immediacy to this passage, an understanding that these holy ones are not in some far off heaven, but right here, cheering us on.  As Eastern Orthodox priest Fr. Stephen Freeman, writes, from this traditional perspective:

Nothing could be more normal than the intercession of the saints. It is simply a description of what it means to actually share a common life – the life of God. How can those who share in the common life of God not care for and pray for one another? How can they not solicit each other’s concern? Far from distracting from God – it draws us towards a right understanding of God – who is the Lord of Hosts – not the God of the autonomous individual.

There are many ways to practice the communion of saints. What I did this week was to read about a different saint every day, pray the hymns or prayers associated with that saint, and ask for his or her intercessions throughout the day. I also redoubled my prayers through Mary, who has always been given a place of honour among the saints.

When I set out for this practice this week, I didn’t have a plan. I knew I’d start with saints with whom I’ve had a particular relationship already and whom I already remember in my prayers from time to time, but beyond that my plan was to see what or who would inspire me in the week. I started with St. Olga of Kwethluk, an Alaskan saint with whom I (and many of my Orthodox friends on the West Coast) I have long felt a strong connection. Then my patrons, St. Matthew the Evangelist and St. Gregory Palamas, whose Gospel and theological writings respectively have shaped me profoundly. On Wednesday, as I was struggling with some writing, I wondered about saints with a particular affinity for writers, and ended up stumbling upon the inspiring life of the early modern Roman Catholic saint Francis de Sales. Thursday, I quite unintentionally came across several references to the Archangel Raphael, and so it seemed fitting to acknowledge him. Friday was the day with the Venerable Bede is commemorated in the Anglican Church and so it seemed fitting to follow that commemoration, since he’s such an important figure in the faith history of my English heritage. And Saturday, I doubled back and remembered all of these figures in my prayers.

Christian history is filled with stories of the miraculous intervention of the saints in people’s lives. But these stories stick out primarily because they are rare and run counter to expectations. Most of the time the saints are content to work, pray, and cheer us on quietly, with just the odd nudge here and there to remind us they’re there. At least this has been my experience. When I look back on times in my life when saints have made their presence known, it’s generally been with a teasing sense of humour and a twinkle in their eye. (In my experience, St. Olga has a particularly cheeky sense of humour!) When it’s been more substantial, it’s always been fleeting and subtle enough that I can’t say for certain whether it wasn’t just my imagination or a dream. (And I’m not sure if it matters. If these things are true, then they certainly don’t work in the realm of physical science.)

That said, this week’s practice of intentional engagement with the communion of saints held no revelations or experiences, but it was a lovely and gentle practice that felt right. It was nice to have company in my prayers and to be reminded in a real way that I am never really alone in my prayers, since there are millions of people praying on earth and in heaven at any given time. The above-cited Fr. Freeman once responded to a question about whether he’d ever consider becoming Protestant again by saying “I couldn’t bear the loneliness.” And that’s something I remember vividly from my Orthodox days — the constant reminders that the saints, angels and archangels and all the host of heaven were joining us in our prayer, and how vital, full, and exciting that made prayer. And, it was nice to have the reminder of that this week.

8 thoughts on “Communion of Saints”